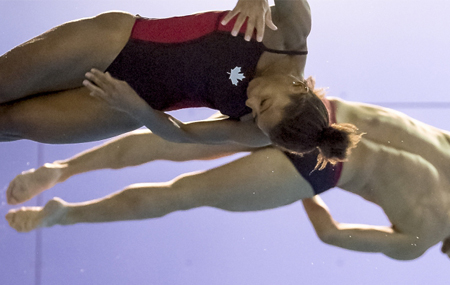 It was necessary to wait for the 10th and last final in Windsor (CAN) and 30th overall at the 2016 FINA Diving World Series to see China missing a gold medal in this competition. It happened today at the conclusion of the third leg of the circuit and the responsible for this “feat” was host country Canada, in the mixed 3m springboard synchro. Wang Han and Yang Hao did not make any serious mistake, they just “forgot” to select dives with a higher Degree of Difficulty. In fact, China was leading until the last round, but Canada’s pair (Jennifer Abel/François Imbeau-Dulac) then presented a DD 3.4 combination, while the Asian athletes performed a DD 3.0. That was enough to make the difference – in the end, even performing slightly worse, Canada got the so-desired gold in 345.69, while China had to content with silver in 343.50. The bronze went to Dolores Hernandez and Jahir Ocampo, competing under the FINA flag, in 313.65.

“We’re very happy because today was our best performance ever, we set a new personal best”, confessed Jennifer Abel. “Obviously it feels good to be winning at home, in front of a friendly crowd. I think Jennifer and I can be very proud. The degree of difficulty of our last dive was higher than the Chinese’s one, so we knew that if we nailed that dive, we had a shot at the podium”, explained François Imbeau-Dulac.

However, this mixed event is not in the Olympic programme. Considering that the main contenders for the medals at the 2016 Rio Olympic Games are also participating in the FINA/NVC Diving World Series, it is fair (and legitimate) to ask until which extent China can be challenged in Brazil this summer. So far, the Asian powerhouse collected a near-perfect 29-win streak before the last stop of the competition in Kazan (RUS, April 22-24). Moreover, in the four individual events in Canada (3m and 10m for men and women), where the participation of two divers  per nation is allowed, China only missed the 1-2 in the women’s 10m platform, where it had only entered one competitor.