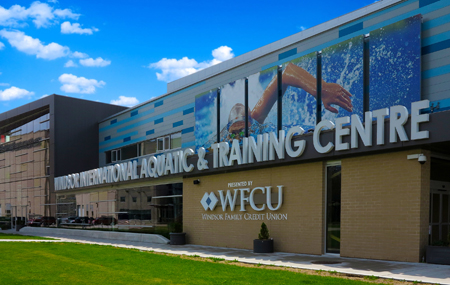 The FINA delegation toured the existing facilities being transformed for the upcoming 13th FINA World Swimming Championships (25m) to be held from December 6-11, 2016.

The city hockey stadium (WFCU Arena) will serve as the main swimming pool (25m) for the World Championships, while another adjacent warmup pool is being built.

In addition, a training venue – the Windsor International Aquatic and Training Centre (WIATC) – will be available for the athletes as early as November 2016. Located in the heart of downtown Windsor and at a walking distance from most teams’ hotels, the facility will also serve as the venue for the FINA Diving World Series up to 2017.

Windsor organisers also already suggested a potential venue for the Championships Opening Ceremony (on December 5th) as well as the FINA Gala Dinner – “Soirée des Etoiles”, an evening during which the best athletes of 2016 will be awarded (on December 3rd).

Preceding the 13th edition of the FINA World Swimming Championships, the FINA World Aquatics Convention will be held from December 3-5. Around 1000 delegates, 400 organisations, 60 exhibitors and 80 speakers are expected to attend this international aquatic rendezvous.

VIDEO: Take a look inside the Windsor International Aquatic and Training Centre