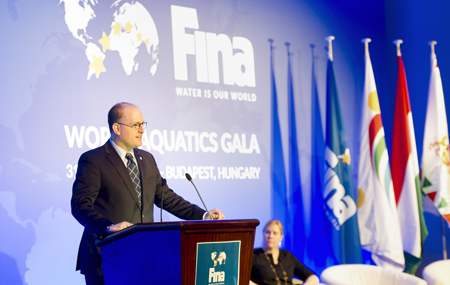 The recent construction of the state-of-the-art Windsor International Aquatic and Training Centre will provide an ideal training facility for athletes intending to compete at the Championships – a project that Mayor Drew Dilkens says shows Windsor’s “deep commitment to the development of Aquatics.”

The training centre complements the city’s plan to establish itself as an Aquatics city, a vision substantiated by the $100m that has been invested in aquatic facilities and events.  Windsor also possesses two excellent swim clubs – The Windsor Essex Swim Team (WEST) and the Windsor Aquatics Club (WAC) – and has hosted Synchro Championships, Masters Championships and the FINA World Diving Series, proving it a capable host for delivering FINA’s major events.

“Windsor loves sports, at all levels and all disciplines,” says the Mayor.  “We are surrounded by water and our residents love to be outdoors and active.”  Windsor’s small-city charm will provide a different look and feel from previous FINA meets, as Mayor Dilkens emphasises that “our residents have been waiting to welcome the FINA family since the announcement was made that Windsor was selected to host the Championships and Convention, delegates can expect a warm welcome when they arrive.”

Windsor is the fourth most culturally diverse city in Canada, with over 100 languages spoken in the city.  “A small city with a big appeal”, says the Mayor.  Athletes, coaches, officials and fans alike will appreciate the ease in which one can travel around Windsor, never being more than a 20 minute drive away from its spectacular waterfront that looks across the river to its neighbouring city in the United States – Detroit.

Mayor Dilkens promises the local residents will be out in full force to cheer on the 40 Canadian swimmers present at the World Championships, including national favourites Emily Overholt, Chantal Van Landegham, Katerine Savard, Santo Condorelli and two-time Olympic medallist Ryan Cochrane. “The World Championships provides a once-in-a-lifetime opportunity for all these local Aquatics participants and supporters to become involved and engaged as volunteers”, says the Mayor.

“Preparations are well in hand” the Mayor reveals, “and in fact, are ahead of schedule in many areas as we get ready to welcome the FINA family to Windsor this December.  I know the Convention attendees will be impressed with the Caesars property – it is one of the best in the country.”

Windsor is large enough to host this world-class event, but small enough to ensure that every guest receives the personal touch for which the city is known.  The city warmly invites the Aquatics community to join the FINA family in Windsor this December for an unforgettable World Championships and World Aquatics Convention.

How could you benefit from attending the FINA Convention?