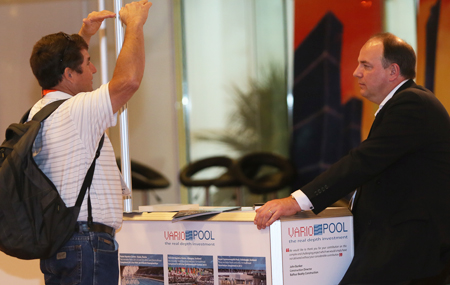 What has been your favourite memory from the FINA World Aquatics Convention (FWAC)?

After the first World Aquatics Convention in Punta del Este in Uruguay we were hugely impressed with the diversity and quality of the presented delegates, who were genuinely interested in discussing with us and how the products of Variopool could suit them.

A day at this Convention saves Variopool weeks of research and laboriously planned meetings. It brings us a lot of information and it allows us to cover relevant ground swiftly and effectively.

Start early with the preparations for the event so you know who will be present at the Convention and what they will do there. This ensures you will meet the ‘right’ people. Beside that you have to let everyone know you will be there. For others the same applies. They want to know who we are and why we are there.

What have been your key achievements at previous Conventions?

The key achievement which always brought us back to the next Convention is the approachability of the World Aquatics Convention. It is a well-organised event that is as informative and useful as it is enjoyable. The supplier meetings exceeded our expectations.

What part of the Convention do you most look forward to?

What we look forward to is the time and possibility we have for conversations and relationships through an enjoyable and relaxed programme that includes networking and drinks.

Who has been the most inspiring speaker you’ve heard speak at FWAC?

The speaker that I most remember is Pierre Lafontaine, former Swimming Canada CEO and National Coach. He was a speaker at the Convention in Russia in 2012. He told us that every country has its own needs when you talk about sports and swimming, but in fact everyone wants the same thing. Namely, a gold medal. We always keep thinking about these words.

In your opinion what has been the best change the Convention has made since 2010?

There is definitely improved facility support for the exhibitors. The booths look more cosy and inviting.

If you could meet with one Aquatic star who would it be?

If I could meet with one Aquatic star it would be great if that could be Matthew Cowdrey. He is a Paralympic swimmer and has a congenital amputation of his left arm – it stops just below the elbow. He already has achieved a lot of successes. He is just 27 and he has already won 23 medals. When you can overcome your handicap and get your skills at this level, it would be an honor to meet you. That counts for every Paralympic swimmer. I think that needs no explanation.

What piece of advice would you give to a delegate attending FWAC for the first time?

As I said before, be sure you visit this Convention prepared. For us this really paid off because we knew who we wanted to meet with. There are a lot of people and when you are there it can be overwhelming. Prepare yourself. And you have to use the event app! You can find a lot of usable information in the app.

Describe FWAC in one word

Variopool are an Official Event Supporter of FWAC 2016. Take a look at our 2016 Partners