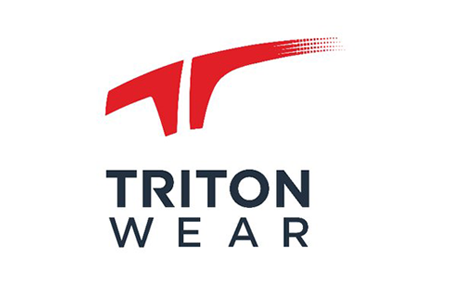 How has swimming performance changed over the past 6 years, and why?

TritonWear, friend of the FINA World Aquatics Convention and expert in data-driven swim analysis, provides us with the data behind the times of the 100m Freestyle…

To identify areas of opportunity regarding the direction swimming is headed, we compared metrics from the Men’s 100 freestyle across 4 races in the past 6 years.  We began with London 2012, through Rio 2016, the World Championships in Budapest in 2017, and finally the 2018 Commonwealth Games in Gold Coast Australia.

We chose these races because we can see clear progress between 2012 and 2016, then further progress, even mid-quadrennial, from 2016 to 2018. While the Commonwealth Games is a less international meet, with several key countries not represented, it is the most current international long-course data available.

There are several graphs throughout this analysis, and below are the general rules for their interpretation.

As we delve into the results, we see that (aside from the first and last finishers) swimmers in 2012 logged faster times than their 2016 counterparts. Similarly, 2016 times were slightly faster than 2017. The 2018 Commonwealth race times were generally slower, as was to expect with the reduced field, with the fastest time equalling the 2017 average. 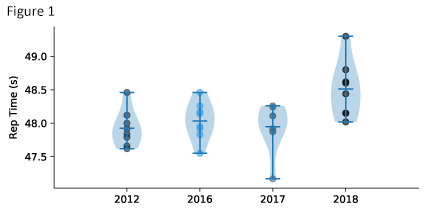 With further examination, we see that time spent underwater is continuously increasing.  In Figure 2 – ‘Time underwater by placement’ – while 2nd and 7th  positions saw a backward slide from Rio 2016 into the mid-quadrennial competitions, most saw a steady improvement over the 6 years. The average total time underwater increased by more than half a second from 2012 to 2016, going up by another second in 2017. In 2018, the average was almost 2 full seconds longer than 2012. 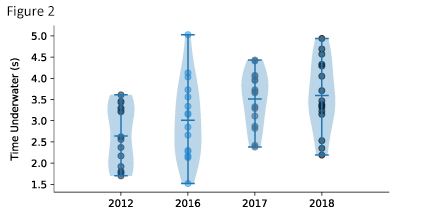 There was minimal change in the average distance per stroke (DPS) over the 6 years, but where we observed change it was notable. 2012 saw the biggest difference between shortest and longest strokes. However, the overall average drop from first to second to split was smallest in 2012 compared to the rest of the field. At the same time, total DPS was significantly longer in 2012, reducing in both 2016 and 2017 before recovering slightly in 2018. 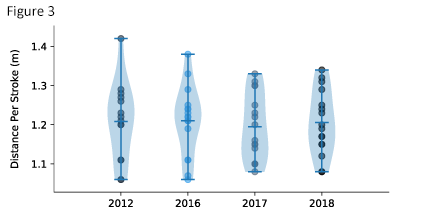 Stroke rate over the years showed a steady decline as well, in line with DPS increase. Most competitors in 2018 pulled at a slower stroke rate on both laps. Average stroke rates for 2016 and 2017 were practically the same, both in average cycle time across the race and when going from first to second lap. Conversely, looking at the 2012 stroke rate compared to other years, we see a dramatic gain in rates in the first lap compared to the second, as well as compared to all laps in 2016, 2017, and 2018 races. 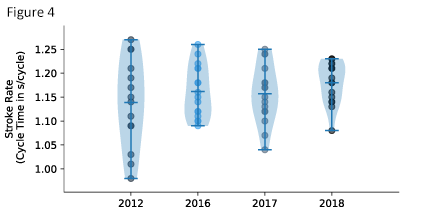 In terms of how to use this data, it makes sense that, if athletes were able to return to the stroke rates seen in 2012 while maintaining the underwater gains noted since and the DPS levels, we might start to see a lot more of those super-suit-era records being challenged in upcoming competitions such as the Pan Pacific Championships in the summer of 2018, and into Tokyo 2020.

To learn more about how you can automatically generate these metrics, or benefit from a data-driven training strategy, please visit TritonWear.