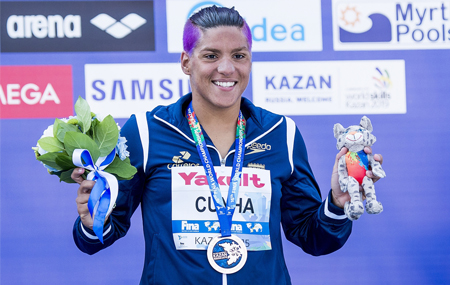 Earlier this year three-time open water swimming world champion, Brazil’s Ana Marcela Cunha, was presented with her third FINA Open Water Swimmer of the Year Award (2010, 2014, 2015) at the FINA Gala Awards and it’s not hard to reason why.

Ana’s talent was evident from an early age when at just 14 years old she collected two gold medals (5km and 10km) at the 2006 South American Games in Buenos Aires. Since then Ana has become Brazil’s most decorated athlete, and in 2015 was crowned Brazil’s Sportswomen of the Year.

Her plan of winning an Olympic medal is already in motion. Ana qualified for the 2016 Olympics back in 2015 after securing a bronze medal in the 10km at the 16th FINA World Championships in Kazan. In her first test of the Olympic year, the second leg of the FINA/HOSA 10km Marathon Swimming World Cup, she won another bronze medal and reached a staggering 17 consecutive international podiums.

We recently caught up with the FINA Gala Award winner to find out how she plans to win that Olympic medal, the motivation behind her new Ana Marcela Cunha brand and the Olympic impact on open water swimming in her home country.

On your website you mention that your plan for the future is to win an Olympic medal. Can you share with us five ways in which you plan to achieve this?

To achieve this medal I make sure I:

What has been the most challenging moment during your training and how have you overcome it?

Every training day is a challenging day for me. But my goal is to overcome these challenges, step by step, until reaching the podium.

What is the best piece of advice you have ever been given by a coach?

Always believe in your potential, work hard and do your best to deserve the best possible result.

Have you incorporated any new tactics into your training?

I am doing periodical training, simulating a 10km event or swimming 1h50m in a pool with a current.

Its race day, how do you prepare before you get into the water? Do you have any habits or superstitions?

On race day I don’t change my routine, I want to be totally prepared for the fight, and swim my event without surprises.

As one of the best open water swimmers in the world there is a lot of pressure on you to do well, how do you deal with that pressure?

I am very demanding with myself, I always want to do the best. Saying this, when there is an ‘external’ pressure I take it as a positive thing, as something that will make me stronger. Dealing with and overcoming pressure is part of my career.

How do you reward yourself after a successful race?

I rest for a while, then I celebrate by having a nice dinner before going back to bed as soon as possible because I must continue training the following day.

You’ve recently launched the Ana Marcela Cunha brand. What was your motivation for doing this, and what do you hope it will achieve?

My brand is just the seed for a huge project that we want to start this year. We are creating an institution, a non-profit association, with the goal of popularising the practice of open water swimming. I would be extremely happy to see a lot of people swimming in the many beaches and rivers in Brazil. People need to learn swimming and to keep practising it; Brazil has a huge coast, a great sea and many rivers. We are working to create a simple and efficient methodology; it’s a legacy I want to leave for the Brazilian people.

With the Olympics taking place in Brazil this year, what impact do you think it will have on the development of open water swimming in your home country?

I hope the Olympic Games will provide the Brazilian people with a special will to practice open water swimming. I want to multiply the number of people swimming! We are known for being a country that loves soccer, we will also love open water swimming in the future!

Finally, if you weren’t busy being one of the best open water swimmers in the world, what career would you like to have?

I would be an open water swimming coach; I want to do that in the future.