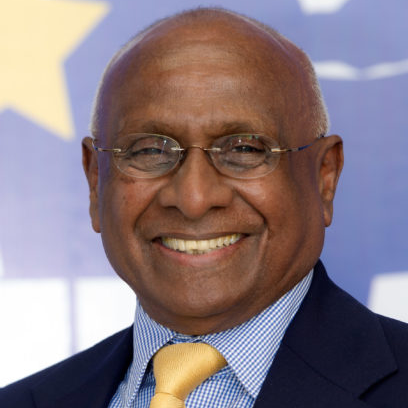 Sam Ramsamy has over 60 years of experience in sport. First as an active athlete in several sports, especially athletics, football and swimming. Besides his teaching diplomas, he also holds a diploma of the Carnegie College of Physical Education, Leeds. He was president of Swimming South Africa (1991-1996) and the National Olympic Committee of South Africa (1991-2004).

Ramsamy was elected a member of the International Olympic Committee (IOC) in 1995 and served on the IOC Executive Board (2006-2014). He has been a member of the FINA Bureau since 1996 and is one of FINA’s Vice-Presidents since 2004. He was a consultant for the United Nations for several years and has written several articles for the United Nations and other international organisations on sport and social affairs. He also authored “Apartheid the Real Hurdle” and “Reflections on a Life in Sport”.

Ramsamy holds Honorary Doctorates from the Universities of Leeds Metropolitan, Surrey and Toronto. He was a member of the Organising Committee for the inauguration of Nelson Mandela as the first democratically elected President of South Africa. Ramsamy was awarded the Order of Ikamanga by the South African Government.