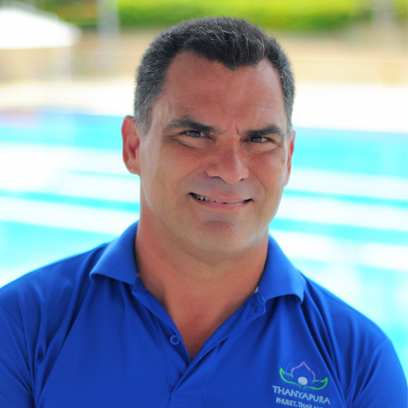 Miguel López was lucky to be exposed to some of the World’s best swim coaches and technicians.  His home coach was the National Head coach in Spain for many years, Quique Martinez Marrero.  In Mission Bay he trained under coaches of the caliber of Mark Schubert, Larry Liebowitz, Walt Schlueter –precursor of many stroke drill techniques- Michael Lohberg and Orjan Madsen –two of the first physiology experts to really dig into lactate analysis and science.  Jack Roach and Steve Bultman.  He later worked at the University of Florida where he worked with more outstanding world class coaches of the caliber of Randy Reese, Mitch Ivey, Skip Foster, and Kevin Thorton.

His specialty has always been creating a swimming culture at places where there was no high level before. From the moment he started as a head coach in 1992 at a small northwestern region of Spain –Galicia- that had never had Olympic swimmers before, and built the programs to the point where they had three Olympic swimmers and three Paralympic medalists, to now with eight swimmers qualified for Rio in Thailand, the programs Miguel has headed have quickly embraced the culture of quality training and competition.

Miguel currently runs the FINA Program for the South East Asia area, with over 150 national records for 18 different countries, and a high level of satisfaction. He also run the competition program at Thanyapura sports club, in Phuket, Thailand, where four swimmers from Thailand participated at the 2015 South Asian Games contributing to four medals and three national records. Ten of his swimmers at the 2016 South Asian Games contributed to 30 national records and 34 medals, including the winningest woman –Kimiko Raheem, with 5 individual golds, 5 individual national records and 5 individual meet records. Three Olympic swimmers from Spain trained with me the years prior to the Olympics. Beatriz Gómez Cortés, Junior world champion in the 400 I.M. and semifinalist at the London Olympics in the 200 I.M. Paula Carballido, Olympic swimmer Sydney 2000. Susana Garabatos, Junior European Championships, 1993, 1994. Olympic swimmer Atlanta 1996.

Miguel was fortunate enough to be an assistant swim coach in the early 90’s at the University of Florida, where he assisted in the training of 5 Olympic medalists, under the guidance of Randy Reese, Skip Foster and Mitch Ivey. Prior to that he swam at Mission Bay, a USA national champion team that trained under the guidance of National U.S. head coach Mark Schubert, and later Steve Bultman, and with cooperation from Jack Roach, Larry Liebowitz, Orjan madsen, and many others. After returning to Spain he worked as a swimming coach and technical director of two clubs. As the creator and founder of C.N. Galaico, his greatest achievement undoubtedly was to develop and then build the swimming sports facility “Rías Do Sur”, a sports complex with an indoor Olympic-size pool, another 25 meter pool, multiple rooms, gyms, and distinctive architecture in the world as the versatile moving wall that was designed according to my specifications, and that the Spanish swimming Federation itself defined, on its website as “the talisman facility” for Spanish swimming. Creating the culture of high-level swimming, in this case, meant convincing a group of 200 parents to invest in what was the first indoor 50-meter pool in the region of Galicia –with a population of around three million people-. As a professor at the Naval Academy in Marin, he was responsible for the organization of the “National Inter academic Championships 2009,” that the Ministry of Defense have been classified as “the best meet ever organized”. The team managed to break four of the seven records of the academy and two national records.