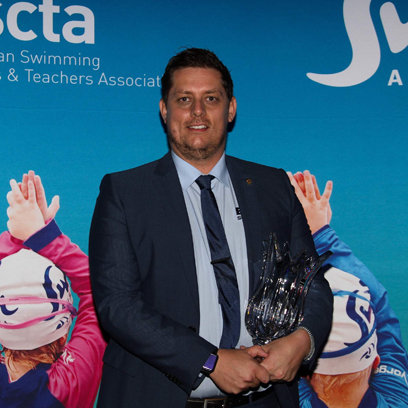 David Lush, the man who guided Emily Seebohm to World Championship gold in Budapest last year, has been named the Australian Swimming Coaches and Teachers Association Coach of the Year.

The 35-year-old joins Fowlie as one of the youngest recipients of the prestigious award.

Lush adopted Seebohm into his coaching group at the Brisbane Grammar School in the lead up to the 2015 FINA World Championships in Kazan when Australia’s longest serving current Dolphin became the first Australian female to win the 100-200m backstroke world title double.

Two years later after an indifferent Olympic campaign in Rio and the diagnosis of endometriosis, the Lush-Seebohm combination struck gold again – this time in Budapest and in the 200m backstroke – in a stunning swim late in the meet which also earned Lush the Outstanding Achievement Award earlier in the night.

Lush also coached Seebohm to gold medals in the 50m backstroke and 4x100m medley relay as a recent a member of the all-conquering Australian Commonwealth Games swim team with his charges Seebohm and Minna Atherton.