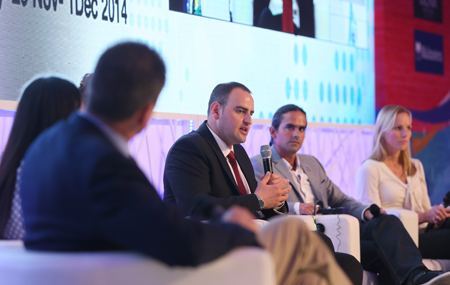 The morning opened with a panel titled “Swimming for All, Swimming for Life Programme: adding social responsibility to FINA activities”. FINA President Dr. Julio Maglione, also Honorary President of the Intergovernmental Committee for Physical Education and Sport of UNESCO, delivered the introductory speech. After reminding  the audience that thanks to the efforts of the Athletes, the Coaches, the Officials, the National Federations and FINA itself, for the first time is in the Tier A of the IOC, he said: “Every year in the world 372,000 persons drown. Water is fatal especially to children in the poor countries. For this reason, we have developed the programme “Swim for All, Swim for Life”.

The aim is to offer to all the possibility of taking swimming lessons. FINA will spearhead this programme with the co-operation of the National Federations members but also with the indispensable co-operation of respected international bodies such as UNOSOP, UNESCO, CIGEPS, WHO and UNICEF, and, of course, of the IOC. The successive speakers all praised FINA for such a meritorious initiative and assured the co-operation of their organisation to the programme. They were: Wilfried Lemke, special advisor to UN Secretary General on Sport; Khaleel Al Jabir, President of the Qatar Swimming Association; Arnaldo Fuxa, Chairman of the Bureau of the Intergovernmental Committee for PE and Sports (CIGEPS); Alexander Schisclik, Chief of Section for the Youth and Sport team of UNESCO; Anton Subowo, Brantwood International Limited.

The second panel was on the theme New Horizons:How to continue to progress. It gathered on the stage representatives of all FINA disciplines but swimming: Water Polo, Masters, Synchronised Swimming, Diving, High Diving and Open Water Swimming. Jean Paul Clemençon, FINA Water Polo Innovation Commission Member, highlighted the need of “easing the rules and promote both more fluidity and ability to score , and less stoppage” in order to make the game more attractive. He also said that universality is the other main priority, meanwhile listing many other items that should either be improved or changed.

In his vision “Learn to swim and play with the ball in the water” classes should become the basis for development. His conclusion: “Development is our future and water polo can win the challenge with organisation”.

Ed Evelly, FINA Masters Committee Chairman, explained the basic philosophy of Masters: “It’s an adult aquatic programme, not only about competition but also fitness, wellness and health, with the added value of immense socialisation”. He recalled the milestones of the movement: birth in  1970 in the USA; first World Championships Tokyo 1996; first World Championships to be held jointly with the elite World Championships in 2015, at Kazan. Evelly praised FINA for such breakthrough decision that will make of the championships a real Aquatics Festival, to which the Masters will contribute with about 10,000 competitors. Evelly’s conclusion: “The movement has potential to continue to grow; as Katherine Johnston, a 97-year old master swimmer from New Zealand, said “I don’t know how to stop. That’s the secret, not to stop”.

Lisa Schott, FINA Technical Synchronised Swimming Member and President of Canada Synchro, spoke with vision and passion. She had a radical opinion on the future of the discipline. She said: “We must think differently, it is time to change the game. The judging system must become more transparent and synchro more accountable. We need a new scoring programme that FINA would approve. New technologies will help judges. The sport itself might be re-branded as Artistic Swimming”.

Kathy Seaman, FINA Technical Diving Committee Chairperson, spoke enthusiastically of her discipline: “For 110 years diving has been inspiring perfection. Over this century, since 1904, when just one event was contested at the Olympic Games (the men’s 3m platform) the programme has much evolved. We are very happy with the high level reached by diving today, in terms of facilities, skills of the athletes, and sportainment”.

Thomas Gompf, FINA High Diving Committee Member, praised FINA for bringing in such a spectacular discipline who has already conquered a worldwide audience “mainly thanks to the Red Bull series, now associated with FINA”. He said: “In Bilbao there were 52,000 spectators, in other meetings the number of spectators went from 45,000 to 60,000”.

The afternoon session was also entirely dedicated to panels. In the first panel “Beyond the Pool Deck” the opinions of some top athletes were required to discuss the theme “How Aquatics can stay at the top of the Olympic Programme”. Retired Water polo player Brenda Villa, who has a stellar roll of honour, said that the game must become more attractive and that the base must be broaden through a programme designed to involve in the game more and more youngsters.

Open Water Swimming veteran Petar Stoychev recommended that the discipline should be always kept in a natural environment. He said: “I choose it because I like the freedom of the nature, no lanes no fences. As an example, the water temperature has to be a factor”. His female colleague Britta Kamrau insisted that the sport should become more visible for spectators, and asked that “courses be chosen near to the shore so that spectators can see”. She also said that “events longer than the 10 km should be more valued”.

High Diving world champion Orlando Duque explained the evolution of the discipline which now, under FINA, “has a very strict set of rules”. “We must keep them, also to allow judges to judge properly”, said Duque.

A panel of four discussed the topic “Creating Outstanding Development Programmes: case studies for National Federations”. Olivier Niamkey, Olympic Solidarity, explained how this important branch of IOC acts in supporting financially, through the International Federations, both athletes and coaches. He mentioned that the excellent co-operation with FINA has prompted the grant of hundreds of scholarships for athletes of all continents as well the organisation of hundreds of coaches clinics worldwide. The National Federations cases were illustrated by Erdem Sezer (Turkey), Jin Teik Oon (Singapore) and Dr. D. Rukare, a newly appointed member of the FINA Bureau (Uganda).

The theme “Moving Aquatics forward: a strategy for continued success” was discussed by a panel composed by Gianni Merlo, president of AIPS (the International Press Association of Sports Journalists), Shane Tusup, manager and coach (of Katinka Hosszu) and Michael Scott, Australian Swimming Federation Technical Director. For Merlo one of the main key for the success of a sport is the presence of champions with personality and charisma. He said: “Spectators want icons and idols, somebody that will catch their imagination and ignites their passion”.

Tusup said: “Our sport (swimming) is about racing, not just at the Olympics but also at the World Championships, the World Cup and so on. It is important to race frequently trying every time to swim your best race and win a gold medal. In this way you can attract the attention of both the media and the public”. For Scott the main issue is “raising the profile of the sport in any possible way”.

FINA Executive Director Cornel Marculescu concluded the two-day Aquatics Convention with the following 6 key learnings and messages from the 2014 FINA World Aquatics Convention: 1. Work with Partners; 2. Expand through events; 3. Get inspiration from athletes; 4. Expand your social network; 5. Communicate your vision; 6. Strive for success.