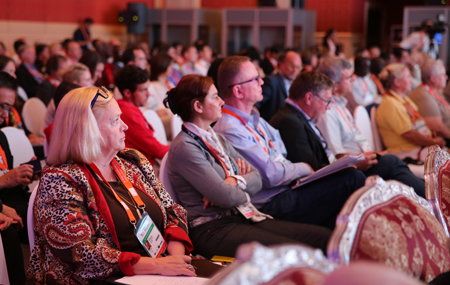 The first, intense, day of the Aquatics Conference, within the frame of the FINA World Aquatics Convention, started with the introductive speech by Cornel Marculescu. After explaining the meaning of the Convention and the goals that FINA wishes to achieve through it, the FINA Executive Director spoke of the absolute need to harmonize the World Calendar for the various disciplines and solicited the utmost co-operation from the National Federations in order to achieve such an important goal. He then presented the FINA Calendar for the years 2015-2017, highlighting the co-operation received from the Continental Associations and the Technical Committees to achieve an outcome that “has no overlaps and ensures an optimal organization of our major events”.

Then several topics were tackled, most with audiovisual support.

Benefits for host cities
The topic “The Host Cities Strategies: the secrets of sustaining legacy” was discussed by the representatives of the Organising Committees of future FINA World Championships:  Vladimir Leonov for Kazan 2015, Peter Knowles for Windsor 2016 and Tamas Gyarfas for Budapest 2021. Each one of them highlighted the benefits that the Championships will bring to the Host City and their Community, both in terms of building new infrastructures, or revamping them, and of benefits to the economy (through the construction works and the sport tourism). For Kazan, where, for the first time the Masters World Championships will take place after the elite World Championships in the six FINA disciplines, the focus was on the airport, the Mass Transportation System, hotels, parks and the Championships venues themselves: an Arena with three pools under the same roof plus two temporary pools installed in the Kazan main Stadium (60,000 spectators capacity). Kazan’s aim, said Leonov, is to host a great event that he labelled as a “Mini Olympiad in Aquatics”. In Windsor, said Knowles, a first class swimming complex and other infrastructures will assure a successful outcome of both the World Swimming Championships (25m) and the 4th FINA World Aquatics Convention.

For Budapest, Gyarfas unveiled the project for the construction of a new outstanding aquatic centre and assured the full support of the government for the event. He said: “Hungary is a sport crazy country and Budapest a sport crazy city. We have time to prepare well the championships, they will be a success”.

The fans experience
For the topic “The Spectator Experience: exceeding expectations of the audience”, Maher Safi, Marketing Expert of the Qatar Olympic Committee, Jon Long, Head of Strategy of the International Cricket Federation and Greg Bowman of Great Big Events delivered presentations. Maher Safi said that through big sport events, Qatar aims to boost both its image globally and become more recognisable all over the world and tourism, while overall creating benefits for economy. Jon Long explained how cricket evolved from an empty stadium in 2007 to full capacity stadium and enthusiastic crowds nowadays. He said that Alignment (direct relationship with sponsor and broadcasters, centralised marketing plan, sportainement) and Effective Segmentation (by format, location, key needs of the audience, music, etc.) are the key drivers of change in sport. After emphasising the increasing importance of Social Media (especially Twitter), he concluded by saying: “Identifying and prioritising the basic needs of the audience is of paramount importance”. Greg Bowman went in the details of a successful sport presentation, stressing the need to create emotions, tell stories, engage and entertain the public in any way (through the announcer, large screens, visuals, the entry of the athletes on the sport stage, sport information, cultural events, music, etc.). He also advocated the integration of Social Media and the need to interact with spectators (almost one on one).

Connecting with social media
The theme “The Social Challenge: connecting fans in a multichannel world” was tackled by Koji Sato of TV Asahi (Japan), Thiago Meirelles of TV Globo (Brazil) and Guzel Gabbasova, PR co-ordinator for Kazan 2015. Thiago Meirelles highlighted the characteristics of the digital era: although the percentages are declining, television is still largely in first place among the preferences of the viewers; internet viewers are increasing and there a relevant (20%) crossover area. The numbers of both the smart phones and the Social Media users are dramatically increasing and television regards mobile media as important PR tools. He said that in the USA, 60 per cent of time spent on Social is on mobiles. He suggested that mobile media are a key appeal young generation but concluded by warning: “If you are not certain of what to do then don’t do it. A wrong approach to Social Media may backlash. Remember, the main purpose of Social Media is updating information quickly not disseminating complete information”.

TV whiz Peter Diamond coordinated this round. He concluded by warning: “The Social Media revolution is on and their role is increasingly important, it is crucial to recognise it”.

Highlighting brand exposure
Omega, Yakult and Myrtha Pools representatives spoke on how “Realising Your Brand Value: creating an attractive commercial property”. For Omega, Mr Thomas Schweizer illustrated the evolution of the company, which has been associated with FINA since 1973. He said the current partnership will expire in 2021. He said: “Omega is not a sponsor but a partner, and as such who has contributed not only to constantly improving the timing systems but also to develop various devices to support the evolution of the aquatic sports, the latest are the adjustable support for backstroke starts and the electronic lap counter for middle distance freestyle events, recently successfully tested in the World Cup last two legs, in Tokyo and Singapore”.

Mr. Mitsuo Murakami, of Yakult, praised the benefits of the product, which was developed ante World War 2 to help the Japanese population stay healthy. Through the years, the product has been improved, and a whole family of healthy drinks was created. Now, the brand Yakult is known worldwide and its products are being sold in many countries.

Myrtha Pools’ philosophy was explained by Mr. Trevor Tiffany, a former Olympic coach now Chairman of the Board of the company. He explained why Myrtha has become the world leader in this sector and a reliable partner for FINA. Then he named the numerous partners national federations, among them the United States and Australia, and listed the pillars of Myrtha’s success: permanent pools (temporary if required), simple and safe construction, long lasting materials, precision of installation, through-life cost, one stop shop, knowledge and experience, references. He concluded by saying that Myrtha is synonymous of “good and fast swimming pools”.

The athletes’ voice
The programme of the day was concluded by a very interesting panel among four athletes who, altogether, had won 14 Olympic gold medals: the swimmers Aaron Peirsol, Alexander Popov, Penny Heyns and the water polo player Tamas Molnar. The theme was “From the eye of the Athlete: an inside look at the changing Aquatics landscape” and the debate was moderated by former British butterflier James Hickman.
The prevalent opinion among the athletes was that FINA should preserve the integrity of the sport as it is now. Popov said: “We don’t need many changes. Even in 20 years from now the ultimate aim of the sport will be winning gold medals, not commercialism. We don’t need changes. Life will drive changes naturally, when they are necessary and when it is time”. Asked provocatively if he would like to see the water in a different colour, Popov said: “Perhaps but certainly not yellow”. Laughs and applauses from the floor.

Commenting on his career, Popov said: “I was fortunate to find myself always in the right place at the right time…almost”. Then he warned the youngsters: “Stay close to swimming pools and be there when the right time comes for you to become a champion. Don’t be impatient and be realistic. It is important to set yourself an achievable goal”.

Penny Heyns suggested that once finished their sporting career even elite athletes may need to be supported in order to overcome the post career syndrome which sometimes makes the transition to ordinary life difficult. She said: “Once you have retired and you are asked what you are doing now, and you are not a doctor or a lawyer they think that you are less than before”. Tamas Molnar said: “Aquatic sport is a big family and water polo is the little brother. The sport must progress but you need to build on the individual first. All the best athletes believe in themselves, they have the passion and the determination, the individual comes first. Water polo can make progress only through a common effort of FINA, the national federations, the clubs, the athletes and the coaches, not FINA alone”. For Aaron Peirsol “swimming must progress through the results, irrespectively of technology”. For all, technology must count marginally, it cannot be the major factor of progress.

Speaking from the floor the FINA Executive Director Cornel Marculescu, thanked the panelists for their brilliant contribution and said the improvement in technology, especially TV technology, is crucial to the progress: “Thanks to new technologies television shows our sports in a better way; we need to take advantage of new technologies”. About water polo he said: “The pool is important but what is around the pool is even more important”.