Investing in a brighter future for Aquatics 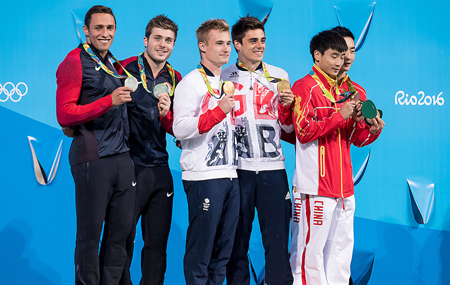 Just two months after the world’s greatest sporting spectacle, FINA provides a review of the Rio 2016 Olympic Games, looks at the challenges ahead, and discusses the opportunities to improve and grow Aquatics around the world.

Never was this formula better put into practice than at the Rio 2016 Summer Olympic Games.

“The enthusiasm and performances of our athletes were second-to-none,” notes FINA Executive Director, Cornel Marculescu. He’s not wrong.

From British diving duo Jack Laugher and Chris Mears ending China’s hopes of a clean sweep of diving golds, to Michael Phelps wrapping up his Olympic career as the most decorated Olympian of all time, the athletes delivered as the world watched.

“In terms of TV exposure we had an excellent collaboration with OBS,” says Marculescu. “On Copacabana beach the TV coverage of the open water swimming events was outstanding. As the athletes were performing far from the shore, the competition could still be clearly followed by spectators on the beach and street.”

There’s no doubt that the athletes were key to this outstanding coverage.

“In recent years, we have been lucky to have had real superstars in FINA sports,” says Marculescu.

“Everyone today knows about swimming thanks to Michael Phelps and his incredible Olympic roll of honour. The ‘Greatest of the Greats’ has 28 Olympic medals, more than many nations as a whole. This is a treasure for us and a way to reaffirm that our disciplines can create great champions.”

FINA aren’t resting on their laurels.

They are fully aware of the challenges that lie ahead and are committed to tackling them head on.

As Marculescu continues, “With the digital revolution, the increasing number of sport events worldwide and the variety of activities for today’s youth, competition is greater than ever. This is why we need to have a first-rate product and a consolidated strategy.

“Quality and quantity are always our challenges.

“We want to continuously create the great stars and ambassadors of our sport, while growing and harmonising Aquatic disciplines on a global scale.

Rio 2016 not only acted as an international showcase for Aquatics athletes, it was also a catalyst for growth in new territories. Nothing highlights this better than the incredible case of Singapore’s Joseph Schooling.

Not only did he win his country’s first ever Olympic gold, but he did so by edging out the great Michael Phelps in the 100m Butterfly, clocking a time of 50.39s… an Olympic record.

“By having new countries on the podium, new territories will become more interested and more invested in promoting our sport, and this creates a cycle of success,” comments Marculescu.

“As the youth in these countries are given increased motivation to swim, dive, or play water polo, this inevitably impacts performance on a national scale.”

While the Olympic Games undoubtedly shines a light on Aquatic sports, nothing demonstrates FINA’s dedication to building a brighter future better than its biennial Convention.

Taking place just three months after Rio 2016, the 4th FINA World Aquatics Convention brings together the entire community to identify the goals and challenges that lie ahead.

As FINA President Dr. Julio C. Maglione makes clear in the Editorial of the present edition of the FINA Aquatics World Magazine, “The 4th FINA World Aquatics Convention once again gathers key representatives from 207 National Federations and many commercial partners for a three-day conference and exhibition. Delegates not only have the opportunity to consolidate networks, but also to extend relations by sharing their experience and knowledge with other players of the Aquatics world.”

The Convention is being hosted by the city of Windsor (Ontario, Canada), and is once again organised in conjunction with FINA’s main sporting event of the year, the 13th FINA World Swimming Championships (25m).

With highlights ranging from the Aquatics Conference to the FINA Swimming Coaches Golden Clinic, FINA World Sports Medicine Congress to the FINA Gala Dinner & Awards Ceremony, this really is a Festival of Aquatics.

“The Swimming Coaches Golden Clinic is always very well attended,” says Dr. Maglione. “Delegates enthusiastically welcome some of the biggest names in coaching as they offer details on the training programmes of our champions and present the challenges faced in preparing these athletes.

“Even more technical, but equally as essential is the Sports Medicine Congress.

“Gathering the most respected and well-known experts in sports medicine, this Congress is a unique opportunity to get acquainted with the latest trends.”

Back to Mr. Marculescu, he is quite confident about the fact that this is the first time FINA’s Convention will be hosted in North America: “The North American market is a huge one in terms of sports marketing and business opportunities and we hope to see many new partners, sponsors, and commercial entities make the trip to Canada to meet and network.

“Moreover, in regards to the Championships, with the USA on its doorstep, we expect Windsor to attract many US swimmers, which will naturally have a positive impact on the quality of the event,” the FINA Executive Director concludes.

The timing and location of both the Convention and Championships mean that the Aquatics World – from elite athletes to coaches, team doctors to lecturers, suppliers to rights holders – will gather in Windsor this December.

FINA extends a warm welcome to the entire industry, inviting everyone to be a part of this ten-day Festival of Aquatics.

Take a look at the 2016 Aquatics Conference Programme.