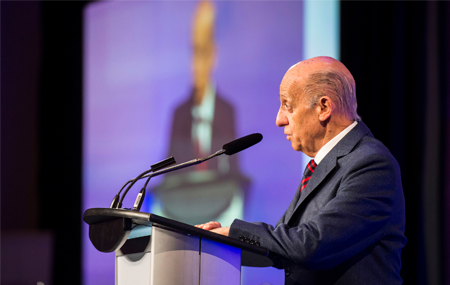 FINA Convention spoke with FINA President, Dr. Julio Maglione about the significance of hosting the 2018 Convention in Hangzhou, China.

What is the significance of hosting the FINA World Aquatics Convention in China?

China is surely a very valuable partner for FINA. As the most populous nation on earth, it is also one of the most committed countries in the promotion of Aquatics. And the results are quite fruitful: Chinese athletes are shining at the highest level at FINA competitions. Moreover, many FINA events are being stage in the country, always with undeniable success. It is therefore very important to host the Convention in such a favourable environment.

What are you hoping to achieve by hosting the Convention in China?

China is a very powerful economy – in fact, the second strongest in the world – and will naturally put a lot of effort and commitment in gathering the protagonists of the Aquatics, a sport in which they have been quite successful in the last years. The Chinese market is also a very vibrant one, so all commercial partners present in the Convention will certainly find added-value in their business opportunities when coming to China.

Are there opportunities for Western businesses in Chinese aquatics industry?

Many, and with multiple choices. China is in terms of territory a huge country and many of its metropolis have millions of inhabitants. Aquatics is a very popular sport in the Asian nation and the authorities in charge of its development are keen in offering the best possible venues and conditions for their youth across the country. This represents countless business opportunities for Western brands and Aquatic-related providers to know a bit better the Chinese market and ultimately decide to invest or reinforce already existing partnerships in China.

2018 brings the 5th edition of the Convention, how has it evolved over the years?

Within the larger Aquatics’ family, everyone knows now our Convention! They know (and most of them experienced on site) that this networking opportunity is a privileged occasion to develop their businesses and, most importantly, directly interact with the protagonists of our Sport – National Federations, their athletes, coaches and officials. Over the last four editions, we have solidify the prestige of this Convention, which is now a must-see event in the FINA calendar. The joint organisation of the Convention with the FINA World Swimming Championships (25m) – since 2014 – was also a very important step forward, as it allowed to combine the fruitful discussions on sport development and strategy, with the performances of the best swimmers in the planet. This is very attractive for all delegates attending the Convention

What were the highlights of the 2016 FINA World Aquatics Convention in Windsor, Canada?

We have discussed many and important topics in Windsor, where the attendance reached unprecedented levels. The Athletes Panel, where some of our Stars in the six aquatic disciplines were present, was of course one of the highlights of the Conference programme, as delegates from around the world are passionate about listening to the keys of success and personal experiences of such champions. Within the frame of the Swimming Coaches Golden Clinic, the lecture by Bob Bowman, coach of the best Olympian in history, Michael Phelps, was also a milestone. The room was fully packed and hundreds of people were listening to his words and get the necessary inspiration for their own athletes. It is still today the most viewed video ever published by FINA in its digital platforms!

What is the state of the Aquatics industry right now?

It is developing like the Sport it represents, quickly and exponentially. Nowadays, the industry of sport is huge and the positive image of FINA in the Olympic movement certainly opened the door for further investment opportunities. Moreover, the increased interest and participation of commercial partners in the Convention is an undeniable sign that the business is going well and that these brands are avid to directly contact with the ones deciding on the development of our aquatic disciplines in the five continents.

What are your strategic priorities over the next 4-5 years for FINA?

There is always a lot to do, in order to improve and reinforce the prestige and excellence of FINA. Our objectives remain constant: increase participation in Aquatic sports, engage and grow audiences worldwide, deliver top-level and exciting events, maximise and invest a significant part of our revenue for a sustainable growth and development of our Sport, reinforce good governance at all levels, and continue ensuring the well-being of our athletes through an efficient anti-doping policy.