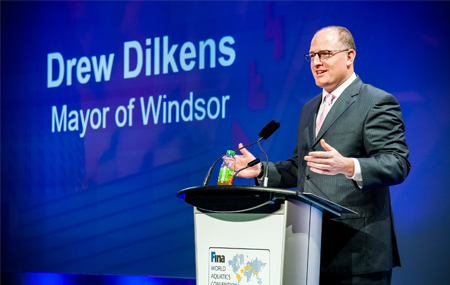 Why did Windsor host the 2016 FINA Convention?

The FINA World Aquatics Convention provided Windor with the opportunity to welcome the finest swimmers, coaches, officials and companies in the world together with members of the FINA family.

The Convention resulted not only in additional economic and tourism benefits for the city but was also the perfect way to highlight FINA and the aquatics community.

What lasting effect did the Convention have on Windsor? Specifically, what benefits has the city experienced?

The FINA World Aquatics Convention generated significant economic activity for the City of Windsor, the Province of Ontario, and Canada. Based on the Sport Tourism Economic Assessment Model (STEAM), the following results were achieved:

What was the single most rewarding thing about hosting the Convention?

The opportunity to network with the world’s best in aquatics enabled us to brand Windsor as a premier destination for international conventions and championships.

What was the significance of hosting the FINA World Championships (25m) immediately after the Convention?

It meant delegates could extend their stay at the Convention to attend the Championships.  It also ensured that the swimming world got to experience all that our city has to offer, including our exceptional convention and aquatics facilities.

Both events added value to one another and allowed the FINA family to hold these two important events in their calendar in the same place and at the same time.

The City of Windsor benefitted from the combined spending of out-of-town spectators and other visitors who came to Windsor for the 13th FINA World Swimming Championships and the expenditure made by organizers of the event: a total of $24.7 million which supported $42.0 million in economic activity in Ontario. The expenditure also subsidized $13.0 million in wages and salaries in the province through the support of 191 jobs, of which 125 jobs and $8.2 million in wages and salaries were in Windsor.

Did the Convention make you want to host another large B2B networking event in Windsor?

Yes, most certainly. The economic impact and prestige of hosting a large-scale event of this nature is of great value to our City.  The tourism benefits, the building of our volunteer capacity, and the branding opportunities are considerable.

What advice would you give to the next city hosting the Convention?

Be prepared.  There was a great deal more work to do than we anticipated, but it was equally rewarding as the event unfolded.

Although the Convention is the responsibility of FINA, the local Championships Organizing Committee is called upon to provide support and resources to assist Convention delivery.  That said, it was a pleasure to work on this event during both the planning and implementation phases. The workload was heavy, but the rewards many.