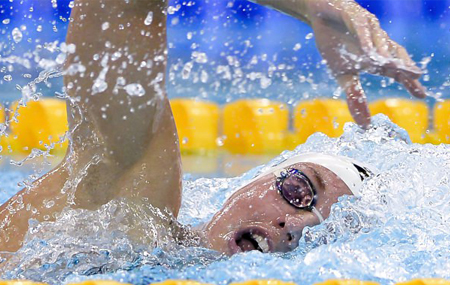 Katinka Hosszu (HUN) continued with her winning saga in the fourth leg of the 2016 FINA/airweave Swimming World Cup, taking place in Beijing (CHN) on September 30-October 1. The Magyar star was once more the athlete to beat, earning seven gold medals – 200m and 400m free, 50m and 100m back, and 100m, 200m and 400m individual medley. Hosszu is the overall winner of the series among women since 2012 and was already the ranking’s leader of the 2016 first cluster of the competition.

Jeanette Ottesen, from Denmark, also shone in the “Water Cube” of the Chinese capital, getting three titles in the 100m free, 50m and 100m butterfly. Alia Atkinson (JAM) was the third swimmer in Beijing with more than one gold, winning the 50m and 100m breaststroke races. The remaining victories in the women’s field went to Daryna Zevina (UKR, 200m back), Rie Kaneto (JPN, 200m breaststroke) and to three Chinese swimmers in the 50m free (Zhu Menghui), 800m free (Hou Yawen) and 200m fly (Liu Siyu).

In the FINA/airweave Swimming World Cup overall ranking, Hosszu comfortably leads with 495 points, while in the men’s classification Morozov is first with 307 points.

Will you be in Windsor this December to watch Katinka at the 13th FINA World Swimming Championships (25m)? Come along early to the FINA World Aquatics Convention and see the latest technologies and events in the world of Aquatics.  Delegate passes available here