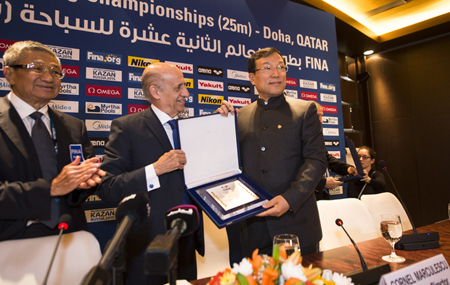 “The city of Hangzhou will offer optimal conditions for the organisation of these Championships. There is a very strong commitment from the local authorities to have this event in this dynamic metropolis”, considered the FINA President Dr. Julio C. Maglione, in the Press Conference announcing the FINA Bureau decision. “China is an important partner of FINA and we are always happy to return to this beautiful country”, added the FINA President.

Acting as Ambassador for the successful bid, Chinese star Xuejuan Luo, 2004 Olympic gold medallist in the 100m breaststroke, was one of the “voices” of the candidate city during the briefing to the Bureau members. Naturally satisfied after the announcement, Luo confessed: “This is a dream that come true. My hometown is Hangzhou and I always hoped that one day we could be able to organise a world championships in the most beautiful city in China”, she declared. “The Mayor of Hangzhou was also here to support our bid, and we can assure that the best swimmers in the world will be able to complete in superb venues”, she added. Working also with the China Swimming Association, Luo promised to be involved with the organisation of the event.

Before the 2018 rendezvous, the 13th FINA World Swimming Championships (25m) will take place in December 2016 in Windsor (CAN).