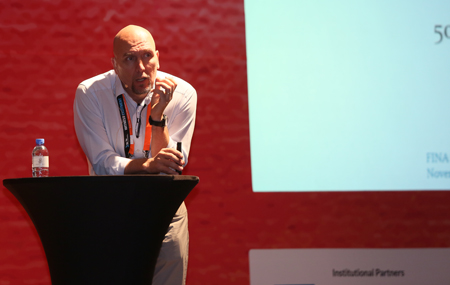 The span of speakers during the clinic proved beneficial for all coaches, from specific training sessions for elite athletes, general training for national teams, managing programmes, nutrition, strength and conditioning and injury prevention.

Marcel Wouda, the Netherlands’ national team coach, opened the final day’s proceedings with his presentation “Application of Science and Innovation in Day-To-Day Practice”. Wouda, a former world swimming champion and record holder, used the example of world-record relay swimmer Femke Heemskerk and the 200m freestyle with emphasis on balanced splits.

In summing up he said: “Progress is all about science, technology and innovation and the application of that in a day-to-day practice.”

His main points also included bringing the experts on to the pool deck; striving for quality in the simple things we do; every day we learn; and humans stay the same, only we are trying to be smarter and to get more out of the athletes.

His final point was: “With every challenge, we have to be creative and that’s where innovation starts.”

He enlightened people with video analysis of the dive start and the work his lab has been doing on researching the angles during the start. Also how university students were used in collecting data and the conversion of that to assist coaches in getting the best out of their athletes.

He also spoke of 3D analysis of strokes with the use of LED lights on swimmers’ arms. One of the final points he made was the technology needs to be simple and fast so that coaches can utilise the data after a training session.

In the afternoon session, Frenchman Fred Vergnoux, head coach of the Spanish Federation, presented on Science and innovation of Distance and IM Coaching. Vergnoux outlined the yearly training schedules of the distance swimmers in the lead-up to the London Olympic Games and beyond.

A third of all training, he said, was outside the water, with running, cycling, rowing and even snow skiing part of the programme. Altitude training in South Africa and Spain is integral to the programme, as is exact monitoring of all weight and strength training. Many training exercises are linked to computers so that the athlete gains immediate notification if the lifts are of the right intensity.

As the coach of dual Olympic silver medallist Mireia Belmonte, Vergnoux spent some time on her programme and especially her motivation. He had several concerns, including the high expense of sending athletes to the FINA World Cup series and the non-television coverage of 1500m and 800m events at those World Cups.

The final presentation of clinic came from Dr Rod Havriluk (USA), the president of the International Society of Swimming Coaches, dealing with Skill Acquisition and Injury Prevention.  He dealt with shoulder injuries and how they were generated from incorrect arm entry. Putting the arm in incorrectly puts more stress on to shoulders as well as generating less force. “Keeping a lot more swimmers in the sport” would come from proper arm entry and improve speed as men lose a tenth of second each cycle and women three tenths.

The clinic was hosted by FINA Coaches’ Commission Chairman Osvaldo Arsenio, who presented each presenter with a plaque from FINA.

FINA Executive Director Cornel Marculescu closed the clinic, thanking all the presenters and the participants. He said FINA tried to bring the best lecturers to the clinic so that every corner of the world could learn. He also said that in Windsor, Canada in two years’ time, lecturers from other disciplines might be invited. He spoke to the World Cup and said it was up to the coaches to fit this into their programmes. The scholarship programme for countries without A and B times was a $6 million investment that FINA regarded as important. ”It was a very good presentation here, very interesting.” He spoke of the importance of swimming as the spearhead of FINA’s disciplines, especially from the London Olympic Games.

“I sincerely express my gratitude for you being here and hopefully we have given you something to take home,” he said.