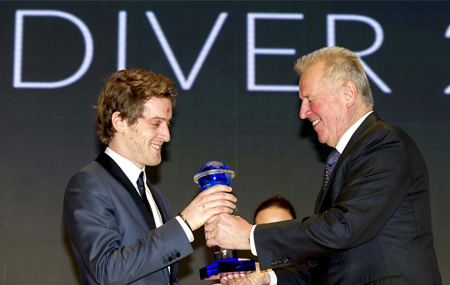 During his interview with FINA, 2016 FINA Gala Award winner and 2015 world champion, Gary Hunt, reflects on his brilliant season, analyses the evolution of High Diving and expresses one dream: the inclusion of this spectacular discipline in the Olympic programme.

How do you feel about receiving this award?

I feel great, it’s brilliant. In the off season, it gives you a little boost to keep going.

What’s your best memory from the FINA World Championships in Kazan?

For me Kazan was a long time coming. At the World Championships in 2013, it was so close until the last second so for me, two years was a really long way coming. When I knew the gold was secured, it was definitely the best moment. I was so worried having the same problem as in Barcelona [where a shaky last dive dictated his silver medal, behind Orlando Duque]. It really was a big relief knowing that I’ve done enough for the gold.

Diving from a 27m board is scary for the majority of us, what makes you different?

When you look at me in videos you may think I’m not scared but trust me I am scared. I just try and put those thoughts behind me and I try and act like it’s no big deal to convince myself that I know what I’m doing. Deep down I’m definitely worried, I know the risk that we all take from those heights, but I think confidence is a massive part of the sport. If you act confident then everything else happens without too much problem.

Have you ever had any accident, or hurt yourself?

Yes, I’ve been known as somebody who pushes the boundaries. One time in 2010, I pushed a little bit too far for what my body was capable of. I landed on my chest flat on the water and I didn’t get knock unconscious but I kind of forgot where I was and I had to go to the hospital for a while. It didn’t put me off but I haven’t redone that dive again but it woke me up in the sense that I have to take things slowly and step by step, showing a lot of respect for the risks we take.

What would be your recommendations to a young person who would like to start this sport?

If a child has a love for the sport of Diving, I would just tell him to keep going and try a little bit of everything. Don’t just try the dives your coach tells you to but try and have fun. I learned so much in the past five years and even after my training session has finished, I tried to teach myself dives that my coach didn’t teach me. So I would just say ‘have fun’, ‘play around’ and ‘try everything’.

What can be the limit of difficulties in High Diving?

I think that the sport of High Diving has no limits. You can see it in the 10m platform in the pool, the dives are still getting harder and harder and when you go to 27 metres, we’ve got even more space to play with. Training techniques and coaches are always improving so the harder dives are going to be pushed further so I really think there is no limit.

How universal can this sport be?

I think this sport has the opportunity to reach a lot of people. So many people can relate to the sport and just jump off from a rock by the sea. Everyone knows that feeling of not wanting to go for it – even metaphorically – that leap of faith and jumping into the unknown is something you can learn a lot from.

Is the Olympics a dream of yours?

Yes, the Olympics is a dream of all athletes. I kind of gave up on my dream when I stopped doing 10m but slowly but surely that dream is starting to be lit again. It’s just a question of time. In my opinion, we will take part in the Olympics. Whether it will be in a time when I’m still capable of diving. I truly hope so. But only time will tell us.

Your message for Budapest 2017?

I’m looking forward to it. I’ve heard a lot of great things about this town. Hungarians love sport. They have a lot of champions here. I’m sure the crowd will come out to see us.