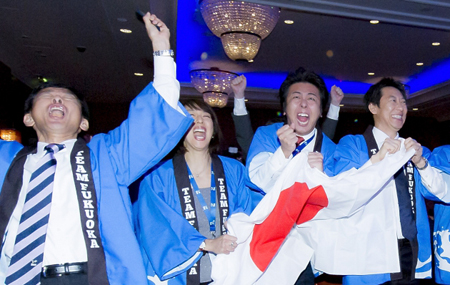 The city of Nanjing (CHN) was the third bidder for the organisation of these Championships.

The FINA President Dr. Julio C. Maglione was happy to announce this decision at a press conference in the Magyar capital: “Today we were presented three extraordinary bids fulfilling all requirements and having great facilities. Both winning cities, Fukuoka and Doha, are strong partners of FINA and will offer optimal conditions for the organisation of these Championships. There is a very strong commitment from the local authorities to welcome this event in their respective dynamic metropolis.”

The Japanese delegation was headed by the very dynamic Mayor of Fukuoka, Soichiro Takashima, who spoke about his city’s passion for Sport: “I am only 41 years old, so I am a relatively young mayor for a city of 1.5 million people, the sixth largest in Japan. But I believe I represent this metropolis quite well, as Fukuoka is also a young city, known for its enthusiasm for aquatic sports. We had a great experience in 2001, and after the staging of the 2020 Olympics in Tokyo, we will have an additional opportunity to develop this successful tradition”.

The main concept of the 2021 hosts is simple: “Compact in size, Big in enthusiasm”, a motto that reflects the concentration of all the venues for the six aquatic disciplines in a 600m-radius. “We want to create a standard for the future editions of the FINA World Championships”, added Mr. Takashima, who was proud to display a video message from Kosuke Kitajima, the great Japanese breaststroke champion, supporting the bid.

From Doha’s side, Dr. Thani Al Kuwari, Secretary General of Qatar Olympic Committee, led the Middle East delegation and was successful in emphasising the added-value of his bid. “The FINA Family has been many times in Doha and everyone knows our true passion for organising top-events. Sport is an important tool for the development of our youth and of our country. Hosting the FINA World Championships for the first time in Middle East will be a great way to develop Aquatics on a global scale”, underlined Dr. Al Kuwari.

Two main competition hubs will be created for the staging of FINA’s major event. At the Aspire Zone complex, will take place the Swimming, Synchronised Swimming and Water Polo events, while the Open Water Swimming and High Diving will take place close to an emblematic spot of the city, the Museum of Islamic Art.

Closing Doha’s presentation, young 14-year-old swimming talent Yacoub Al Khulaifi, expressed a heartfelt desire: “I want to swim in Doha, but at the FINA World Championships. It will be a dream for me, and, who knows, I can be the first world swimming champion from Qatar”.

Before 2021 and 2023, Budapest (HUN) will host the 2017 edition of the FINA World Championships and FINA World Masters Championships, while Gwangju (KOR) will stage these two competitions in 2019.