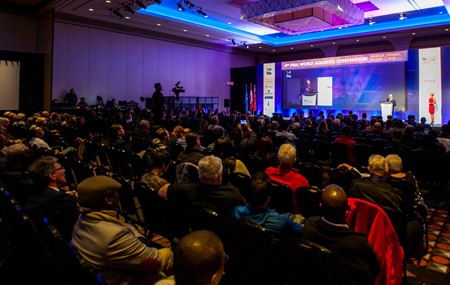 President Maglione reminded that “this is the second time this important initiative is held in conjunction with our FINA World Swimming Championships (25m). Two years ago, in Doha, Qatar, this led to a great success, offering a bigger visibility to both events. This will also be a reality here in Windsor!”

“The network opportunities with commercial partners, already connected to our Sport, or still discovering it, are a privileged way to put in contact those developing Aquatics, in all its many components: athletes’ preparation, organisation of events, promotion and marketing, media and TV exposure,” the President continued.

The President concluded by saying that “this synergy is essential to keep FINA as a pillar of the Olympic movement. Aquatics brings a significant added-value to the Games programme and the attractiveness of our disciplines is enjoyed by many hundreds of million TV viewers around the planet.”

Windsor Mayor Drew Dilkens declared: “We are absolutely delighted to have you all here to kick-off the 4ht FINA World Aquatics Convention, just days from the start of the 13th FINA World Swimming Championships. Swimming has become a main focus for our city as we promote an active and a healthy lifestyle for our citizens.”

Aquatics Canada President Lisa Schott enthusiastically added to the message from the Mayor: “It is almost surreal to see you all sitting here for this event. It is finally real. I have always thought it was a brilliant idea to host this international event in the city of Windsor. Through this project, we proved that together we can make things happen. When we won our bid, everyone was asking where Windsor was. You finally discovered it, you are here and we are really happy with that!” she said.

“I have travelled almost 20 years all over the world to FINA events but this time it is taking place in my own home, how existing! We are hosting a swimming championships in a hockey rink, how Canadian! To everyone, enjoy your time here!” said Dr. Margo Mountjoy, FINA Bureau Member from Canada.

Finally, the President of the Canadian Olympic Committee Tricia Smith, Olympic medallist in rowing, recalled the importance of Sport in modern times. “It is a true inspiration for our lives. When I remember the powerful images from Rio 2016 for example, the joy of the athletes and their winning spirit, this is magic for me. Simply magic!” said Tricia Smith.

Myrtha Pools representatives attended to press conference too and announced the agreement renewal with FINA for the next six years. Their hard work and professionalism for transforming the hockey rink into the 25m swimming pool was recognised and applauded.

After thanking the Local Organising Committee and the Mayor’s personal involvement in the project, FINA President announced a record number of athletes participating in the World Championships – close to 950 in total. He also noted the record participation of companies taking part in the Convention that are somehow involved in the sport.

Mayor Dilkens said: “I hope that this great event is going to be an inspiration for the next generation of swimmers in Canada and for anyone who wishes to engage with Aquatics.”

He added: “We are very grateful to host the event and we’d like to thank all the authorities. It really takes a lot of dedication to put together an event of such importance.”

Canadian Federation President Lisa Schott explained that she and her team have been working with Windsor for five years now: “We are very proud about this event which will have a very Canadian sense to it!”

Canadian FINA Bureau Margo Mountjoy said: “We turned our frozen water into real water for the event and I really look forward to welcoming our national stars and all the world’s best athletes into our Canadian waters. This is going to be a seriously high-quality event; very high level of performances will be witnessed. Good luck to all the swimmers and all the people involved.”

The FINA Sports Medicine Congress debuted this morning too in Windsor and will be held in parallel of the Convention on December 3 and 4. The main themes discussed today were the nutrition that leads to success and injuries and illness prevention as part of the wider theme “Protecting the Aquatic Athletes”. Professors from Aberdeen (GBR), Hamburg (GER) and New Zealand among others took part in the panels and brought their expertise to the discussions. An Exhibition hall is also accessible as of today to all delegates to network and find out about the latest innovations in this industry.