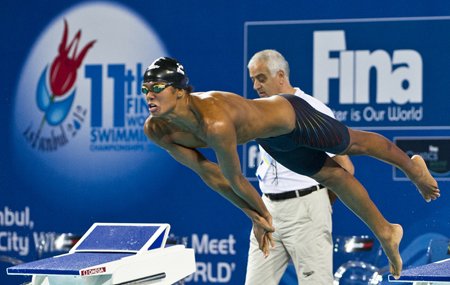 Given the development of Swimming, which progressed from one recognised season into two different periods of the year – typically, for the North Hemisphere, comprising the long course (50m-pool) season in Spring/Summer, and the short course (25m-pool) during Autumn/Winter -, FINA formally approved the first short course world records in 1991, opening the door to the organisation of the first FINA World Swimming Championships (25m) in 1993.

Held in a ‘classical’ indoor swimming pool, the championships were dominated by the Chinese swimmers in the women’s events. Out of the 16 races on the programme, China got 10 gold medals, with Jingyi Le getting five of them (50m and 100m, plus the three relays), and her teammate Guohong Dai earning four titles (100m and 200m breaststroke, 400m individual medley and the 4x100m medley relay). The remaining victories went to USA (four), Australia and Great Britain (one each).

In the men’s field, there was a wider variety of countries with gold medals, with the supremacy going to Australia and United States (three each). Mark Foster (GBR) was the fastest in the 50m free and obtained in Palma his first out of 13 medals at these championships (from 1993 to 2008!). On the other end, Franck Esposito’s victory in the 200m butterfly remains the only gold medal from France (both men and women) in the history of the championships.

The scenario changed drastically in Rio de Janeiro, where the championships were held on a temporary pool in the most famous beach in the world: Copacabana. Without a strong opposition (the USA did not send its best team), Australia dominated the competition, with 12 gold medals (seven among men and five in the women’s field). The heroes of the competition were Australians Matthew Dunn, Dan Kowalski and Samantha Riley, all with three titles each, with Riley establishing new World Records in the 100m and 200m breaststroke.

At home, Gustavo Borges made the delight of the Brazlian “torcida” getting four medals, while Costa Rica’s Claudia Poll got two victories among women (200m and 400m free), being until today the only athlete from her country with medals in this competition.

As in Rio, Australia dominated the operations at the “Scandinavium” arena, where a temporary pool was installed. With a total of nine gold medals (and 17 awards overall), Australians had in Matthew Dunn (three titles), Michael Klim (2), Grant Hackett (2) and Kristy Ellem (2) the stars of the company. With his five presences on the podium, Klim was particularly successful and his Gothenburg performances helped in his status of second most medalled male swimmer in the history of these championships (a total of 15 medals, including five gold, from 1995 to 1999).

Jenny Thompson (USA), the best ever in terms of medals in this competition (17, including nine gold, from 1997 to 2004), started her collection in Sweden, earning four awards. James Hickman (GBR) would also start in Gothenburg the unprecedented feat of five consecutive victories in the same event, from 1997 to 2004, in the men’s 200m butterfly.

With Australia again in the lead (nine gold medals, for a total of 27 awards), fierce competition came from Japan in the women’s events, with both Masami Tanaka and Mai Nakamura getting three titles each. Ian Thorpe (AUS) made his appearance in the competition (winning three medals), while his teammates Matthew Dunn and Grant Hackett continued earning medals. “Almost” at home, these championships marked the decline of China, with only one title (and six presences in the podium).

Martina Moravcova (SVK) got three titles in Hong Kong, reinforcing her position of second best ever of these championships – also 17 medals like Thompson, but with “only” seven gold, between 1995 and 2006!

Arrived to the fifth edition of the championships, the USA finally emerged as the top-nation, with nine gold (and an overall 25 medals). Neil Walker (USA) was the man of the competition, with five titles (50m and 100m backstroke, 100m individual medley, 4x200m free and 4x100m medley relay). Moreover, he earned silver in the 50m butterfly and 4x100m free relay. Jenny Thompson and Chad Carvin completed the US golden series.

Among women, Therese Alshammar (SWE) collected four victories – 50m and 100m free, plus the 4x100m free and 4x100m medley relay. From 1997 to 2006, she is the third most medalled female athlete in the history of these championships, with 15 presences in the podium (including nine victories). Her compatriot Lars Frolander completed Sweden’s seven triumphs, with three titles in the men’s events (100m free, 100m butterfly, and 4x100m free).

At the renovated 1980 Olympic pool, the duel USA-AUS ended up being favourable to the Australians, with more gold medals (10 to eight), but less overall presences in the podium (18, against 26 for the Americans). However, the brightest star in the Russian capital was once more Therese Alshammar and her four wins – 50m and 100m free, 4x100m free and 4x100m medley relay. Her Swedish teammate Emma Igelstrom got three triumphs also among women, while the best in the men’s field was Grant Hackett (AUS), also with three victories.

Yana Klochkova (UKR), who had been one of the best at the Olympics in 2000 (and would repeat the same brilliant performances in 2004) also took home three gold medals, in the women’s 400m free, 200m and 400m individual medley.

In the superb “Conseco Fieldhouse”, home of the NBA team “Indiana Pacers”, all the winners were “rewarded” with a live anthem performed by a choir of young children, and USA naturally dominated the operations, with a total of 41 medals (including 21 gold). However, the “most valuable swimmer” of the competition was Brooke Hanson (AUS), with her amazing six gold medals: 50m, 100m and 200m breaststroke, 100m and 200m individual medley, and 4x100m individual medley. She is the only athlete up to date to have won six gold medals in the same edition of the championships.

On the men’s side, Brendan Hansen (USA) got four titles, while his teammates Aaron Peirsol, Jason Lezak and Ian Crocker earned three gold each. Before withdrawing due to a back injury, Michael Phelps won the 200m free – it constitutes his only medal and appearance so far in the history of these championships.

Held also on a temporary pool at the spectacular Qizhong Stadium, these championships were highlighted by the number of participating countries (for the first time, more than 100). In terms of performances, Australia was the best in China, with more gold medals (12) and more medals overall (25) than the USA (six and 21, respectively). Individually, Ryan Lochte (USA) was the male swimmer of the championships, with his six medals (gold in the 200m backstroke, 200m and 400m individual medley, silver in the 4x100m medley relay, and bronze in the 4x100m and 4x200m free relay). Thanks to this result, Lochte is presently the most medalled swimmer of the championships, with 15 awards between 2004 and 2008.

Among women, Australia’s Lisbeth Lenton (Trickett) was the swimmer to watch, with her five gold (50m and 100m free, 100m butterfly, 4x200m and 4x100m medley relay) and one silver (4x100m free relay). Matt Welsh, also from Australia, left Shanghai with four gold, while three other athletes got triple golden: among men, Ryk Neethling (RSA), and in the women’s events Jessicah Schipper (AUS) and Hui Qi (CHN).

Benefitting from an innovative sport presentation, the competition at the “Manchester Evening News” arena saw the US swimmers at the top of the medal chart, with 10 victories, against eight for their Australian arqui-rivals. However, the nation with more medals overall was the host Great Britain, with 24 presences in the podium (announcing a brilliant performance some months later at the Olympics in Beijing).

Ryan Lochte (USA) and Mireia Belmonte Garcia (ESP) were the best swimmers at the 10th FINA World Swimming Championships (25m) in Dubai (UAE), after getting respectively seven and four medals at the impressive Hamdan bin Mohammed bin Rashid Sports Complex. This consecration was not new to Lochte, already the “most valuable” athlete of the competition in 2006 (Shanghai) and in 2008 (Manchester). For the Spaniard, on the contrary, this was a completely new situation, after reaching the podium in the most demanding events of the programme – gold in the 200m butterfly, 200m and 40m individual medley, and silver in the 800m free. At 20, she obtained a significant breakthrough in Dubai, and became since then one of the swimmers in evidence in major international competitions. Lochte, already a confirmed star, made history in Dubai by being the first swimmer in the history of the championships to win seven medals in the same edition of the competition.

Dubai 2010 marked the definitive return of the FINA World Swimming Championships (25m) to the December spot and this 10th edition opened also a new era in terms of participation, registering a new record of attendance, both in terms of athletes and National Federations.

For the fourth consecutive edition of the FINA World Swimming Championships (25m), Ryan Lochte (USA) was the winner of the FINA Trophy for best male swimmer, earning an unprecedented eight medals in Istanbul: 1st 200m Free, 1st 4x100m free, 3rd 100m fly, 1st 4x200m free, 1st 200m IM, 2nd 200m back, 1st 100m IM, and 1st 4x100m medley! Lochte concludes his participation in Istanbul with an accumulated total of 30 medals at these championships since his first appearance in Indianapolis in 2004. Moreover, the 11-time medallist at the Olympics was the only swimmer to establish new World Records in Istanbul: firstly in the final of the 200m IM (1:49.63) and then in the semi-finals of the 100m IM (50.71).