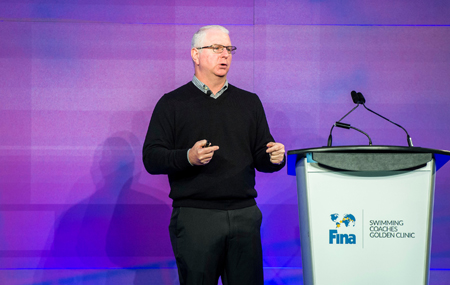 Bowman highlighted his Christmas-New Year training of 2002-03, explaining how Phelps improved with his “unbelievable work ethic”.

For six years until the 2004 Olympic Games, Phelps trained 365 days a year, a staggering statistic in itself. Bowman detailed his training programmes; how he improved Phelps’ breaststroke over a long period and what times he was doing in training, many times on or under world-record pace.

He explained Phelps’ early years when he was a “little brat with a discipline problem all the time. He was causing so many problems so we had to put him into an older group.”

He talked of how Phelps could swim five 100s on a minute as an 11 year old at the end of a session, intimating his incredible potential. Bowman said that once Phelps learned the six-beat kick, his swimming “exploded”.

Other quotes from Bowman: “Michael is a notorious descender, especially in training. He always has something at the end.”

“Set goal for stroke count and set a goal for time, then I adjust those.” “If you’re not feeling good, focus on your stroke and sometimes that will turn things around and sometimes it’s what you get out of that day.” “I can’t be on them every minute of every day, they would go crazy and I would go crazy.”

The question-and-answer session that followed was equally as enlightening. Session two focused on emerging technologies with five speakers introducing their products. Tristan Lehari, of Tritonwear, showcased his device that tracks individual athletes in training sessions, giving feedback on everything from number of strokes, timing, push off the wall and other efficiencies.

Genadijus Sokolovas, of Global Sport Technology, spoke of the Swim Power Test, which will be offered free of charge to all teams at the upcoming World Championships. Velocity and force is collated on video and testing is completed within 10 minutes. Results allow coaches to analyse swimmers’ strengths and weaknesses.

Christoph Trautner, of Contemplas, spoke of his company’s video-based motion analysis software, which utilises five cameras — one above and four under water — to analyse swimmers’ performances. Analysis covers the start, turn, timing and technique.

The afternoon session split into two groups with one conducted at the pool and the other at the main venue. At the pool, workshops were staged on preventing career-ending wrist injuries in diving; in-water retrieval and resuscitation; composing training series based in VO2 and lactate kinetics; optimising performance through nutrition and metabolic profiling in elite swimmers.

The main-venue session was entitled “Enhancing Performance With Golden Sport Science and Medicine”. Peter Jensen, of Sport Psychology Canada, took on “The winning mental game” and spoke about the development of self-awareness.

Professor Jean Coté, Professor and Director of Queen’s University, focused on coaching young athletes with personal engagement, quality relationships and appropriate settings. Changes over time occur, he said, with competence, confidence, connection and character. This leads to positive outcomes — performance, participation and personal development. Dr Joel Staeger, of Indiana University and the Counsilman Centre for Science and Swimming, targeted “Helping coaches through the physiology and biophysics of swimming”.

He told us about the USA Swimming database and the points of interest within and the need for other nations to establish databases. Dr Inigo Mujika of Spain embraced “Maximising taper in aquatics”. He suggested that a two-week taper was ideal and that “the safe bet” was to go for a progressive taper instead of a step taper. The average improvement from a suitable taper was found to be three percent. He also said that while the training volume would reduce by up to 60 percent, training frequency must be about 80 percent.

He spoke of the benefits of the foot wedge, the best position for the hand grip and have the body fully out of the water at the start to minimise water resistance and maintain velocity during gliding. Dr Emily Pattinson, from the University of Winchester in England, spoke on self-efficacy in diving and sport having a positive effect on physical and mental health.

It was noted that in her study, male divers were found to have higher self-efficacy than female divers, who were probably more vulnerable. Better self-efficacy in interventions could improve performance, safeguard mental health, highlight which athletes need more support and talent identification.

Dr Graham Briars, a British paediatric gastroenterologist, looked at the supposed benefits of sports drinks. A study where athletes competed in controlled swim sessions, with one group drinking sports drinks, one on water and one with no fluid intake. Non-drinkers swam faster than water drinkers and sports drinks swimmers were the slowest, proving that sports drinks have no benefit over water.

Dr Reed reported on the use of dietary supplements and medications by athletes at the 15th FINA World Championships. Vitamins, NSAIDS and amino acids were the most frequently declared substances. In closing the congress, Dr Emily Pattinson was presented the Cameron Award for 2016.