In a spectacular ceremony at the Ceasar’s Hotel in Windsor (CAN), FINA paid today its annual tribute to the best athletes of 2016 during its FINA/Alisports World Aquatics Gala – “Soirée des Etoiles”. The group included the best male and female competitor in each of the aquatic disciplines, with the 2016 Olympic Games in Rio largely determining the outcome of the evening.

In Swimming, Michael Phelps (USA) and Katinka Hosszu (HUN) were the best of the year, after their outstanding results in Brazil – six medals (including five gold) for the North American and four podium presences (comprising three titles) for the Magyar great. The best Olympic swimming performances went to Adam Peaty (GBR) and Katie Ledecky (USA).

In Water Polo, the Olympic and World League champions, respectively Serbia among men and USA in the women’s field, were naturally the winners. In Diving, Chinese divers Chen Aisen (two gold medals in Rio) and Shi Tingmao (Olympic champion in the 3m individual and synchro springboard) were the best of 2016. Olympic gold medallists Ferry Weertman and Sharon Rouwendaal (both from the Netherlands) won in the Open Water Swimming category, while synchronised swimmers Svetlana Romashina and Natalia Ishchenko (Russian winners of the duet and team events in Rio) got their discipline’s prize. Finally, World Cup winners Gary Hunt (GBR) and Lysanne Richard (CAN) were consecrated the best high divers of the year.

At the end of the Gala, Michael Phelps received a special award from FINA: “Aquatic Legend, the Greatest of All Time”. It was a fair tribute to the North American, who retired following the 2016 Games, after earning 28 medals at Olympic level, an unprecedented feat among all sports. 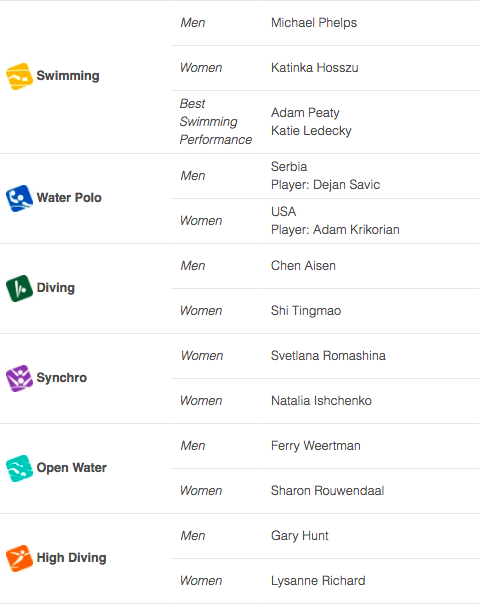 Finally, the FINA Media Award of 2016 was awarded to Clémentine Blondet, from the French sport daily newspaper L’Equipe.

The “Soirée des Etoiles” was first held in Doha, Qatar, in December 2014, in between the annual FINA World Aquatics Convention and the FINA World Swimming Championships (25m) and was then organised in Budapest (HUN) in January 2016.