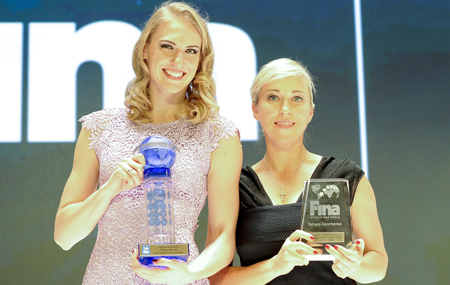 The FINA Athletes of the Year 2015 were unveiled in Budapest (HUN) in a memorable FINA World Aquatics Gala – “Soirée des Etoiles” (Evening of the Stars), held in the iconic Vigado Concert Hall on Sunday January 31, 2016.

FINA awarded the best athletes across FINA’s six disciplines in men and women’s categories and paid tribute to their greatness and achievement in the sport.

In addition, an award for the best swimming performances in Kazan 2015 was presented to a male and a female athlete.

The 2015 winners per category are:

The “Soirée des Etoiles” was first held in Doha, Qatar, in December 2014, in between the annual FINA World Aquatics Convention and the FINA World Swimming Championships (25m).