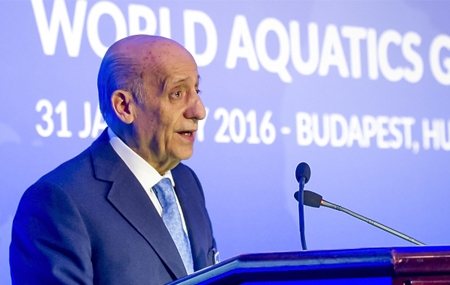 In his Opening speech, the FINA President Dr. Julio C. Maglione highlighted the main reason of the Budapest rendezvous, the reward of the FINA stars for their 2015 performances. “Behind these talented men and women, your work, as FINA Member Federations, is essential. You are FINA, and the choices you take are the only ones counting when we develop our activities and strategies”, Dr. Maglione said.

After underlined the challenges related to Sport in general during the last months, the FINA President listed the main goals for 2016: ”Reinforcement of the image and value of FINA and Aquatic disciplines; Continuation of FINA’s financial assistance to its members; Enhancement of commercial, sponsorship and TV agreements; Consolidation of our Development Programmes; Increased presence on social media and digital platforms; Organisation of a superb Aquatics competitions at the 2016 Olympics, consolidating FINA as a leading Sport in the Games’ programme”.

About the Olympic Games, the FINA Executive Director informed the National Federations about the challenges concerning the venues, but ensured the FINA Family that everything possible will be done to guarantee the best conditions for all participants. On Windsor 2016, Mr. Marculescu expressed his confidence on an excellent organisation and announced the raise of prize money paid to the best athletes, now ascending to US$ 1.2 million.

Mr. Vladimir Leonov, Minister of Sport of the Republic of Tatarstan, recalled the success and enthusiasm concerning the organisation of the 16th FINA World Championships in Kazan (RUS), which registered two important records: the highest number of participating countries (184) and the best-ever TV cumulative audience worldwide with 6.8 billion viewers. Mr. Leonov recalled that the economic impact related to the organisation of the Championships reached over US$ 162 million, and that the legacy for the city is of paramount importance for its youth. “We are very proud of our organisation and we sincerely think that the FINA Family had an unforgettable experience in Kazan”, declared Mr. Leonov.

Drew Dilkens, the Mayor of Windsor, praised the excitement of Canada’s most southern city in hosting the 2016 FINA World Swimming Championships (25m), while Peter Knowles, CEO of the Organising Committee, gave practical information about visa procedures, transportation and accommodation plans, and competition and training venues. “We are a small city, but we are waiting the entire world to discover our vocation for staging a top-level event”, confessed Mayor Dilkens.

Budapest 2017 delegation was headed by the Government’s Commissioner Balazs Furjes, who shared Budapest passion for Aquatics and strong commitment to deliver an excellent edition of the FINA World Championships. Details were given on the proximity of the venues, namely the outstanding new Aquatics Centre, to be ready by the beginning of 2017.

It will be the greatest sporting event our beautiful capital ever hosted. All the venues will be concentrated in the city centre and the Danube river will play an essential role in the atmosphere of these Championships”, considered Mr. Furjes.

In the last panel of the day, it was emphasised the importance of the “Swimming for All, Swimming for Life” programme, as to reduce the alarming rates of annual drowning, taking the lives of 380,000 persons. “In general, our International Federation is perhaps more known for the memorable events it organises and for the great Stars of our six disciplines. But as a world governing body, we think that we also have a social responsibility towards the ones still not acquainted with our magnificent and natural element, water. Our responsibility includes children, teenagers, adults, seniors, and people with disabilities, who can be victims of this unfortunate situation – drowning”, considered the FINA President.

Other guests in this Panel included Wilfried Lemke, United Nations Secretary General Special Adviser on Sport for the Development and Peace; Arnaldo Fuxa, President of UNESCO-CIGEPS, the intergovernmental body in charge of sport matters; and Osvaldo Arsenio, Chairman of the FINA Coaches Committee. “As part of our Development strategy, the United Nations is paying a lot of attention to Sport. As said by the UN Secretary General, ‘Sport is not a luxury’; in the case of Swimming, it’s not only a vital skill, but it is also a funny and healthy physical activity”, Mr. Lemke said.