FINA Athletes of the Year 2014 unveiled 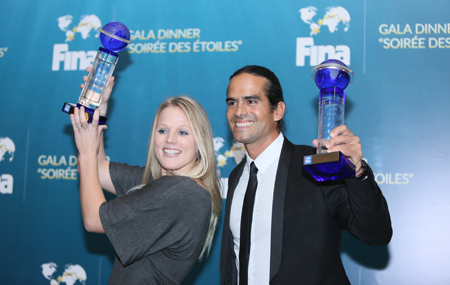 The FINA Athletes of the Year 2014 were unveiled in Doha (QAT) in a memorable Gala “Soirée des Etoiles” (Evening of the Stars), held after a successful two-day FINA World Aquatics Convention and FINA Swimming Coaches Golden Clinic. Less than two days before the start of the 12th FINA World Swimming Championships (25m) also being held in the Qatari capital from December 3-7, the Aquatics Family paid a sincere tribute to its great stars in the six aquatic disciplines.

The list of the FINA Best Athletes of the Year includes:

Some of these athletes’ coaches were also present in the Doha, and received a FINA Coaches Achievement Award. Also for the first time, a FINA World Journalist Award was presented to Alan Abrahamson for his contribution to raise the FINA image. Mr. Abrahamson is also the author of a biography on Michael Phelps, the best swimmer and Olympian in history.

In this magic evening, FINA was honoured with the presence of Sheik Sheikh Ahmad Al-Fahad Al-Sabah, the ANOC (Association of National Olympic Committees) President, who received the highest FINA award, the FINA Prize.

Before the start of the show, including musical and dancing performances, the FINA President Dr. Julio C. Maglione highlighted the importance of this moment. “As you know, we are choosing for the last years the Best Athletes of our disciplines, but no formal ceremony was organised to publicly recognise their effort and talent”, considered the FINA President. “Therefore, this is why we are here tonight! To express our deepest recognition and appreciation for what these brilliant athletes are doing to raise and consolidate the FINA image and the value of our Sport”, he concluded.