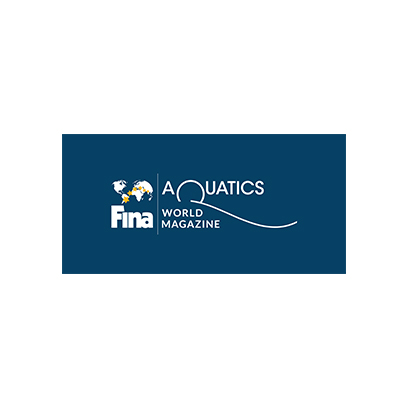 This bi-monthly magazine is the official publication of FINA, available in both printed and digital format. It reaches all 209 FINA Member Federations, who are authorised to distribute the magazine among their respective members, clubs, sponsors and the local media. The FINA Aquatics World Magazine launched with the approval of the FINA Bureau, headed by President Dr. Julio C. Maglione and with the strong and constant support of FINA Executive Director Cornel Marculescu. The magazine enjoys huge popularity among its readers and received a warm welcome from aquatic fans.

The authors are well-known, recognised journalists of the worldwide aquatic family, particularly with regard to the members of the FINA Media Committee. The magazine is one of the main supporters of the FINA World Aquatics Gala “Soirée Des Etoiles”. The editors-in-chief are Tamas Gyarfas, FINA Executive Board Member and Pedro Adrega, Head of FINA Communications Department.