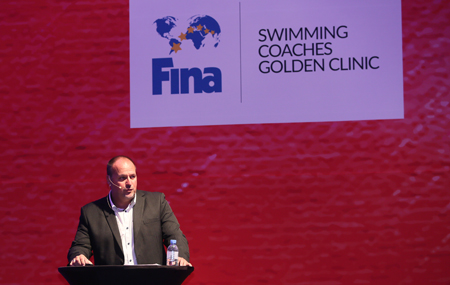 The two-day FINA Swimming Coaches Golden Clinic opened in Doha, Qatar today with a highlight presentation from South African head coach Graham Hill. More than 200 coaches listened intently as some of the world’s leading coaches expounded their theories and unveiled their techniques and training programmes.

The enthralled audience heard Hill deal with pre-season planning and how he manages his superstar swimmer Chad Le Clos (RSA). Hill said that Le Clos thrived on heavy training in competition while some of his other charges, including distance swimmer Miles Brown (RSA), followed different programmes and had different demands.

While Le Clos would sustain heavy training and constant competition, especially during the World Cup legs, Brown only came in for the last cluster.

Hill said that Le Clos constantly swam 10km daily in training. “Chad would swim a long warm-up in the morning, go to the heats (of the World Cup), return for another long session and then race finals in the evening. The 10km is training only and competition distances do not count (in the tally). It seems to work for him.”

Hill cited former Manchester United football manager Sir Alex Ferguson as his guide to managing elite athletes “with so many egos in the same room”.

Hill outlaid his programme for the year and that 2015 would be no different from other years with a huge focus on the Mare Nostrum series, Hungarian open nationals and training in Pescara, Italy as well as altitude chamber training in Doha. “There are no big real secrets out there. Many of you are trying to do the same thing.”

With Rio 2016, there might be some changes to negate the need to travel from Europe before the Olympics. However, Hill said that the Mare Nostrum had been vital in his programmes for the past 14 years and the World Cup was equally important.

“The World Cup is a way for athletes to earn their money with FINA putting together a great (financial) package. They can work on their starts and turns and they learn how to race. The athletes will get better (with constant World Cup competition).

“We need to show the world that we are serious about our sport and we need to bring the World Cup up to the same level as the golf and tennis circuits,” Hill said. One of the main points he made regarding the future of the World Cup was to attract more top-line athletes and perhaps introduce more legs.

The packed room earlier heard from eight-time Olympic coach Andrea Di Nino on all aspects of science and innovation in sprinting, incorporating video segments from leading Italian sports scientists. His attention to detail about the butterfly technique of European champion Evgeni Korotyshkin (RUS) and how he could improve via video coaching was fascinating.

Various quotes to come from this video presentation included:
“If you’re good at the pre-hab, you don’t need the re-hab.”
“What the athlete wants (in body shape) is not necessarily what the athlete needs.”
“Power is nothing without control.”
“Improve power with improved technique.”

Lange told of van der Burgh’s three hard training days and three days focused on weight training and Sunday off. He logged his training distances (ie, 1739km in the pool and the 164 hours of gym training in 2012), which included days of up to 14km, heavily biased to breaststroke.

Lange outlined the specific training sessions to the last metre and with a focus on quality throughout. Cameras snapped busily as the schedules appeared on the screen.

Australian coach Rohan Taylor, presented on building successful performance teams with an emphasis on information and technology systems. As the coach of dual Olympic gold medallist Leisel Jones (AUS), Taylor showed how he used technology to analyse her stroke from underwater.

He said he works on what sports were the world’s best and by learning from them, implement best practice on a daily basis. Taylor is also partnering with Aspetar in Doha to have elite Australian athletes undergo altitude training. Aspetar’s Tom Patrick took over for part of the session, explaining the role Aspetar plays in getting the best out of international athletes.

The day finished with a presentation by Dr. Margo Mountjoy, FINA Bureau Member, on FINA-Yakult nutrition.  She reviewed the general principles of nutrition in sport with specific recommendations for swimming and open water based on the available scientific studies in aquatic nutrition.