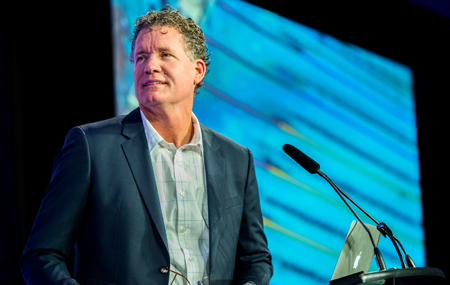 Marsh gave his insight to what happens behind the scenes and “How to handle the pressure of Olympic and World competition”. He spoke of what the USA team did in the lead-up to the Rio de Janeiro Olympic Games and, more importantly, snippets on how individuals were treated to get the best from their performances.

“My favourite thing to do at the Olympic Games is walk from the warm-up pool to the competition pool. I train my eye to see what excellence looks like.”

He is constantly asked: “What is the secret?” He said: “It’s everything. Everything is important. Our coaches’ role is to take the burden and anxiety off the athletes. I’ve learned a lot of things from my mistakes. Getting swimmers’ input is really critical. As soon as we stop learning we’re not such a good coach.”

He listed his five most important points:

Specifics that he followed in the lead-up to Rio included giving athletes six days off at home, that included just one media opportunity, but gave them grounding to relieve tensions.

The first training camp included families; the introduction of the bell at the Olympics; coaches jumping into the water fully clothed; harmony in the warm-up area; making sure that athletes practised everything, down to even singing the national anthem while on the podium, were all considerations. Passing a water melon around under water was also a game changer, he said. When it came to social media, Marsh told his team that when they were uploading information, they were representing the whole team. “This time the team did it really well.” Marsh was in charge of eight Olympic gold medallists in Rio.

The importance of technology

“The flume helps to improve anaerobic and aerobic endurance and sprinting capabilities.”

Among the many other applications, was a drag function, poolside jumping, smart phone apps to help coaches compare several performances and motion-capture technology using split screens from above and under the water simultaneously.

The Doppler device for analysing velocity and pressure on both arms was also viewed. He also looked at high-tech facilities with one pool smothered in cameras and screens.

When it comes to the future, he foresees motion tracking, relaying functions,

He finalised his talk with: “Use new tools to define the problems we need to solve and support in decision-making.”

Ben Titley, Canadian head swimming coach, spoke to “Coaching an aspiring Olympic gold medallist” in the first afternoon session. He talked of his 16-year-old Olympic 100m freestyle champion Penny Oleksiak — the first athlete born in the 21st Century to win Olympic gold — and the 4x100m and 4x200m relays, which both claimed bronze, and how those results were achieved.

Titley arrived in Canada from Britain in 2012 and concentrated on women’s sprinting, seeking committed athletes from a very small pool of swimmers. He detailed the challenges of a young swimmer competing at the senior level and the quick career development ahead of the Olympics.

He spoke of her tactic to take her last breath well out from the wall, gaining valuable centimetres and making up extra positions. His final comments leaned toward what the future brings for the young star, who has done what no Canadian athlete has done before, winning four medals at the one Olympics — two gold and two bronze.

No reward for mediocrity

The final session to wrap up the clinic had Bill Furniss, the Great Britain head swimming coach, speaking on “Constructing a winning programme for an Olympic cycle”.

Furniss, since taking over his role after Britain’s poor, three-medal showing from the 2012 London Olympic Games, has lifted the team from 20 percent of the team performing season or lifetime best to 68 percent in Rio and six medals. There were also seven fourth placings with six of those just hundredths of a second off bronze.

He is attempting to find a “British Way” where Britain can be the best in the world. “You have got to sell belief. They can win, undying, unnerving belief. Not one shadow of doubt.”

Part of this is by surrounding the team with the best staff members dedicated to being team members. His task was to give “Direction, signposting. This is where we are going and this is how we are going to get there.“

He spoke also about the Athlete Performance Awards and the need to perform at the major events to gain public funding. With this, his mantra was you “cannot reward mediocrity”. Sitting at 10-16 in the world rankings was not seen as high performance, he said.

His goals were “to get better year on year in the four-year cycle; having no passengers; self-learning athletes and staff; closer, caring relationships; do it our way and enjoy the journey”.

One other point that came through in his lecture was there was no substitute for racing, pointing to how close the racing was in Rio.

The two-day clinic was well received by the large numbers of participants at all the sessions.