Changing it up: How Bill Furniss created an environment of success at British Swimming 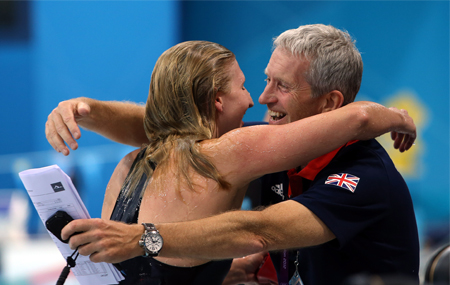 After a disappointing home Olympic Games in 2012 that saw Britain’s swimmers fall well below their target of 5-7 medals, British Swimming announced Bill Furniss as its new Head Coach.

Taking over a team that took only one silver and two bronzes in London, Furniss immediately set to work alongside newly-appointed National Performance Director Chris Spice to apply a tougher approach in order to create an environment of success.

“I knew we had world-class swimmers and world-class coaches,” says Furniss, who coached British star Rebecca Adlington to a pair of Olympic gold medals in 2008.

“It was just a question of getting everyone to work together in one direction. I thought we could do that, making certain changes that would be pretty productive.”

Three and a half years on and British swimmers excelled at Rio 2016, claiming six medals including one gold.

So how did he do it? How did Furniss take a team that suffered a £4m funding cut for the Rio Olympic cycle, and turn it into British Swimming’s most successful Olympics in nearly 100 years?

Swim teams often look to emulate the big swimming nations dominating the world stage, but Furniss believed they could do it differently.

“For me, there was an opportunity to take best practice from countries producing the most successful competitive swimmers, and apply it in a British way that was relevant to our culture. That’s what I think gave British Swimming our edge” says Furniss.

This philosophy is one that he is keen to share with the swimming community.

“I want my knowledge and understanding of best practice to be adaptable. To coaches analysing our general principles for success, I encourage them to apply these ideas to their particular situations and cultures.”

Furniss and his team spent hours building the mental strength of their swimmers.

“If you act like the best in the world every day – how you train, how you prepare, how you conduct yourself, how you eat, how you think – the chances of being that person increase,” says Furniss.

“One of our behaviours is that we never talk about outcome, we talk about what we can influence at this point in time – and if we do that as well as we can, the outcome will come to us.”

In his mission to convert finalists into medallists, Furniss has spoken a great deal about the ‘small margins’ it takes.

“If you’re just missing out, first you must identify why, and that could be a result of hundreds or even thousands of factors,” says Furniss.

“You’ve got to identify the why and address it. You then have to rehearse it, practice it, and be in a situation where in that pressured moment it’s not uncommon to you. If it’s a shock to the system, you’re always going to fail.”

“It’s difficult,” says Furniss, “because it’s different for every individual athlete, but we work with each one to figure out what their tipping point is.”

On the pulse with the coaches

How Furniss works with coaches is one of his core strategies.

“I’m on deck with them when they’re coaching. I don’t interfere, but I do keep my finger on the pulse.

Developing the next Olympic superstar

What’s next for British Swimming?

The Federation recently announced a team of 16 for the 13th FINA World Swimming Championships (25m) which takes place 6-11 December at the WFCU Centre in Windsor, Canada.

“It all starts again,” says Furniss.

“In Windsor, we’ll be looking at some of our swimmers who might be in the frame for Tokyo – giving them an opportunity to swim on the world stage.

“With regards to the next Olympic cycle, it’s important that our senior Olympic competitors have a chance to rest after Rio, so there was no pressure on them to compete in Windsor. And what this does, is give me the opportunity to take a large junior group with several experienced swimmers.

“For us, Windsor is not an end in itself but rather a very first stepping stone towards Tokyo, providing us with the chance to look at some new young talent and see where we are.”

Bill Furniss is speaking at the 3rd FINA Swimming Coaches Golden Clinic on the subject of ‘A winning programme for an Olympic Cycle’. The Coaches Clinic, which takes place 4-5 December at Caesars Windsor Resort and Convention Centre in Ontario, Canada, is a key highlight of the FINA World Aquatics Convention. Coaching superstars Bob Bowman, David Marsh, Fred Vergnoux and Ben Titley are also confirmed to speak.