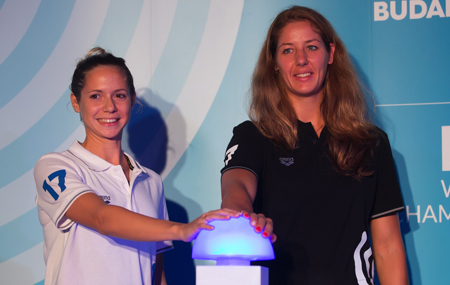 A grand aquatic party kicked off the final countdown to the 2017 FINA World Championships in Budapest (Budapest 2017). Held in a huge indoor water paradise, named Aquaworld, 500 of the future volunteers gathered to celebrate the 300 days to go mark.

FINA President Dr Julio C. Maglione sent a message to the organisations on the occasion on Saturday September 17.

“It will be a fantastic event in a city regarded as one of the most popular destinations in recent years. I fully trust the organisers for delivering an outstanding FINA World Championships on a high level showing the utmost dedication from everyone working for the success of the event.”

In his speech LOC Co-Chairman and FINA Vice-President Tamas Gyarfas told the volunteers that their participation and efforts were the most important key in the success of the World Championships.

“Without you this event cannot happen. Your role is just as important as the athletes’ performances. Our organising committee will do its best to deliver a great event and with your contribution I’m sure we can make it.”

Boglarka Kapas, third in 800m free in Rio, said that she couldn’t wait for the start of the World Championships.

“This is going to be a huge event. After a successful Olympics the motivation level usually drops but to have the Worlds in Budapest gives me enormous boost for the re-start and it will be so great to swim in front of my family and friends.”

She also had some words for the volunteers. “It’s great to see so many of you here, a big thank for all of you for becoming part of this big event. See all of you in 300 days!”

Till date more than 3,350 volunteers registered to be part of Hungary’s largest sport event ever in history. Almost 500 of them attended the countdown party and once the clock started to tick they could begin partying, fittingly did some swimming and other fun the complex offered with all the pools and water slides around but they could also dance into the night as a DJ produced some great music for them.

The 2017 FINA World Championships will be staged on 14-30 July in Budapest and Balatonfured.