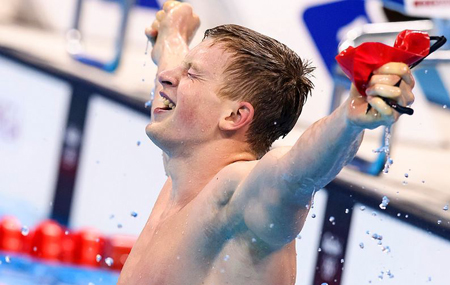 It was his first Olympics. Adam Peaty went into the Rio 2016 Olympic Games hoping to learn a lot. He left with Team GB’s first gold medal of the event, breaking two world records in the process; and let’s not forget the leading role he played in winning the Men’s 4x100m medley relay silver medal.

All this from someone who as a child was scared of water, and who at the age of 15 hated racing finals. So how is it then, Adam went on to become the first British man to win an Olympic swimming gold since 1988? There’s no doubt that the credit goes to the man himself, and his ‘warrior-like’ attitude in and out the water. But let’s also take a moment for the people that helped him along the way…

In swimming, the difference between winning a race and coming second can be a matter of milliseconds. Everything needs to be perfect: preparation, performance and equipment – the swimsuit, goggles, and cap are all crucial. For Rio 2016, Adam had sponsor arena in his corner for all his equipment needs. arena even gave Adam’s family their own supporter’s kit!

“arena has been supplying the world’s top swimmers with racing and training swimwear for over 40 years, and were delighted to have equipped Adam for his first Olympic appearance in Rio this year. Adam wore arena’s Powerskin Carbon-Flex VX racing suit, Cobra Ultra goggles, and 3D Race cap to help him beat 2012 Olympic champion, Cameron van der Burgh, by more than 1.5 seconds in the 100m breaststroke final.

“As a product-orientated brand, arena speaks to athletes and coaches to understand technical requirements and training routines so that their products give the swimmer everything they need to maximize their performance.” (Giuseppe Musciacchio, CEO, arena co)

Mel Marshall started coaching Adam when he was 14 following her retirement from elite swimming after competing in the 2008 Beijing Olympics. In 2014, Mel was named British Swimming’s Coach of the Year, and that was before Adam had even competed at a World Championships, never mind won gold at an Olympic Games.

“Adam has come a long way as an athlete in the last eight years. But all we did was uncover his capabilities. He was destined for greatness. Our job was just to illuminate his potential, to let him, and others, see it. The Olympics was an amazing event and the 57.1 a historic swim, one that myself, Adam, his friends and family and the fans can enjoy forever. To sport he is a champion character. To the arena he is a warrior that won a great battle – the battle to deliver his very best when it matters the most.” (Mel Marshall, Olympian and swimming coach)

The swimming facilities of Tenerife Top Training are used by famous swimmers from all over the world, and most recently by Adam Peaty as he prepared for Rio 2016.

“We were extremely happy to have hosted Adam and his coach Mel for the final stages of Adam’s Olympic training. It gets hot here so the conditions were great for preparing Adam for Rio. Whilst he was here Adam tried out our hydrodynamic swimming flume which analyses swimming technique using 3D video recording.

“Both Adam and Mel enjoyed the peaceful setting of the camp and have said they hope to come and stay with us again in the future.” (Gregor Zielhardt, Manager, Tenerife Top Training)

arena and Tenerife Top Training are exhibiting at the 2016 FINA World Aquatics Convention – the first official meeting of the international Aquatics industry following the Rio 2016 Olympic Games. Join us in Windsor (Ontario, Canada) and be part of the post-Olympic discussion.