Aquatics Conference, Day One: Swimming, a sport for life 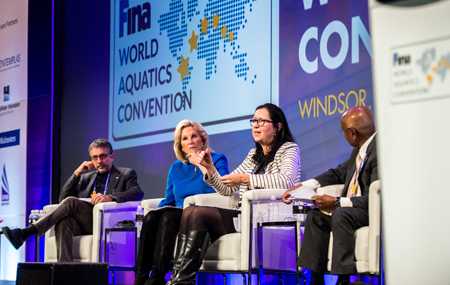 Today’s first session of the Aquatics Conference programme, moderated by FINA Vice-President and IOC Member Sam Ramsamy of South Africa, opened with a “Swimming for all – Swimming for Life” programme update.

The FINA initiative launched in 2014 in collaboration with UNESCO (United Nations Educational, Scientific and Cultural Organisation) and CIGEPS (The Intergovernmental Committee for Physical Education and Sport), has the aim of providing individuals from all ages, backgrounds and capacities, with the opportunity to learn how to swim.

The presentations provided updates on the recent months’ activities and reflected on the successes achieved so far. Following the presentations, discussions also identified key opportunities for a global expansion of this initiative.

Moving from talk to action

The FINA President Dr. Julio C. Maglione began by outlining the latest steps taken by the Commission and underlined FINA’s ethical and moral obligation to act in this area.

“We need to work together to make the world a better place. With this in mind, we are committed to providing free programmes to help reduce death by drowning and increase access to the sport worldwide. It is crucial that we continue to address the World Health Organisation’s alarming statistics warning that drowning is a serious and neglected global health issue.

The President proudly repeated that “swimming is the one and only sport referenced in the revised version of the International Charter for Physical Education, Physical Activity and Sport, and we take a lot of pride in this. The Charter states that swimming is a vital skill to everyone exposed to the risk of drowning. The document will be finalised in Kazan (RUS) next year in July.”

“In order to implement the Swimming for All – Swimming for Life programme, FINA and UNESCO absolutely need the support of governments. Without their help and support we cannot take this programme any further. It is key that our National Federations individually engage with their local governing bodies in order to implement this programme in a close framework that involves all parties.”

Aimed at countries with fewer resources to teach their people how to swim, FINA reaffirmed its commitment to assist those that need help the most.

“It is important to emphasise that this programme is not only aimed at saving lives, but to increase participation and make our sport more universal. We are going to make these programmes available for free.”

500 million people swim around the world

A very passionate FINA Coaches Committee Chairman Osvaldo Arsenio of Argentina said: “Swimming produces extraordinary changes not only within the framework of competition but also among the youth of the world and the health of young people in general. Swimming is recommended to practice by general practitioners because it can be practiced at all ages. There is a low risk of injuries.”

Mr Arsenio added that around the world “500 million people can swim, it’s more than people playing football or basketball. Our sport saves lives and we want to tent to the universalisation of its practice.”

UNESCO Chief of Youth and Sport Section Alexander Schischlik explained why UNESCO believes that the Swimming for All – Swimming for life programme is a smart project.

“This initiative is the first ever project by an International Federation that puts health at the centre of the attention. Swimming is the most complete Physical Education activity all around. It is a very smart investment in swimming and that is why we really need the involvement of all the stakeholders, particularly the private sector.”

Former CIGEPS Chairman Arnaldo Fuxa delivered an update on programmes in the Caribbean and Latin America regions, adding: “Being able to swim is not a luxury and is not simply a sport, but rather an essential skill for every human being so as to allow them to survive in a world that is 75% made up of water. Learning how to swim is a key factor in the education of children and young people but it must also form part of their culture and heritage. This is the only way to make education more complete and directly linked to the day-to-day life of every individual.”

Sam Ramsamy concluded the session with a digital media presentation of recent initiatives in South Africa.

Discussing good governance through positive leadership, the speakers shed light on the current challenges that many sport organisations are facing. The discussion focused on how FINA and its leadership can take the initiative in this area.

In this panel, topics such as transparency, democracy, accountability, conflict of interest and integrity were discussed.

Jean-Pierre Morand, Donna de Varona and Tricia Smith – Photo by Giorgio Scala/Deepbluemedia
Tricia Smith, also International Rowing Federation Vice-President said: “I have certainly learnt a lot about governance over the years. In sport you have rules, and guidance. Athletes and officials know what they can or cannot do. It is part of the daily life of any organisation.”

“I have a very much proactive approach to good governance. Changes within the Constitution need to be applied. Reviewing and adapting existing policies is a necessary step to move forward in the right direction.”

Donna de Varona said: “The faster we review our governance, the faster we’ll regain the trust of the public, because at the moment it is dominated by the cheaters, by doping and corruption. People are turned off by all those factors.”

“I would always recommend to include athletes within the organisation because they know what happens in the field of play. Bringing new people in and regularly training them is also very important.”

Jean-Pierre Morand said: “Good governance in sport means that each organisation is responsible for conducting activities that serve the organisation’s objectives and not for other purposes.”

“Your organisation has to be accountable to your stakeholders and to the public. The public is now a key stakeholder and owns the sport. The public wants clean and transparent competition to which organisations have to respond positively.”

The power of aquatics

According to the World Health Organisation (WHO), worldwide obesity has more than doubled since 1980. Even more alarming, more than 42 million children under the age of five are currently overweight. Aquatic sports can largely benefit these people for the long term and that is what this afternoon’s session “The Power of Aquatics, what can aquatics do to contribute to a healthier society?” covered in particular.

Dr Robert Sallis, Advisory Board Chairman, Exercise is Medicine and former President of the American College of Sports Medicine said: “Exercise is the most powerful medication and the most important determinate of health, physical activity. Exercise is a powerful tool for both the treatment and prevention of chronic disease and obesity, as well as premature death. I believe that physical activity is the major public health problem of our time. Therefore, we must begin to merge the healthcare industry with the sports industry.”

“We need to change the focus in sport from abs and buns to hearts and lungs.”

Chris Wilson, Director of Marketing for Swimming Canada, provided the audience with a number of insights regarding the importance of swimming in Canada.

“We are a swimming nation. There are approximately 3.8 million kids in Canada that swim. When asked about the performance of the Canadian Swimming Team at the Rio 2016 Olympic and Paralympic Games, 10% of Canadians said it encouraged them to go swimming.

“Our government is understanding the preventative link between sport and long-term health. This includes a link between learning to swim and preventing drowning and near drownings. It’s a huge step. It’s also a huge challenge because of the sheer size of our country and the number of swimmers in the water.”

Melissa Backhouse, General Manager for Participation and Sport Development at Swimming Australia and Nancy Miyake, Regional Development Officer for the Oceania Swimming Association, addressed some of the issues facing Australia and the Oceania region. The joint presentation highlighted the motivation behind both organisations to encourage healthy lifestyles and use sport as a tool for social change.

To wrap up the power of aquatics session, FINA Bureau Member Dr. Margo Mountjoy unveiled plans for the FINA World Aquatics Day, an annual event to raise awareness of aquatics worldwide and encourage all National Federations to create and promote their own local initiatives. The event will be held on the first weekend of July each year, with the first event launching on 1 July 2017.

Today’s conference concluded with an update on the various FINA Development initiatives and programmes designed to support the growth of National Federations, athletes, coaches and officials. The session included an update on the development of swimming in Africa, Olympic Solidarity, FINA Coaches Certification Programme and Pools for All activities.