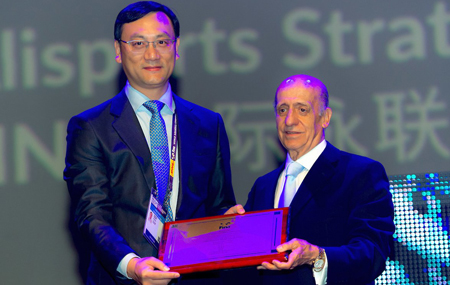 FINA is pleased to announce that a long-term partnership has been established with Alisports for the organisation of the FINA World Aquatics Gala “Soirée des Etoiles”, from 2016 through 2025.

The important initiative, aimed at paying an annual tribute to the best athletes and coaches of the year in the six aquatic disciplines, will be known as FINA/Alisports World Aquatics Gala “Soirée des Etoiles”.

In addition to this partnership, Alisports became the exclusive ecommerce, ticketing, and sports tourism partner for the Chinese territory.

In regards to the promotion of Aquatics, Alisports will have the opportunity to be associated with open water and high diving events. Moreover, Alisports will focus on youth training and coaching staff training, establishing training courses and venues, in order to raise the participation in Aquatics.

During this year’s FINA Gala, aside from awards in the six FINA disciplines, a special award was given to a Chinese athlete – the Alisports 2016 Exceptional Aquatics Performance Award went to famous Chinese diver Chen Ruolin.

FINA President Dr. Julio C. Maglione expressed his satisfaction with this agreement: “Alisports is a very important company in a vast territory and a great FINA partner, China. This co-operation will enhance the organisation of our annual Gala, but will definitively improve the visibility and promotion of Aquatics in China”.

Alisports’ CEO Zhang Dazhong said: “We are very honoured for this opportunity to work with FINA, with this Gala serving as a starting point for our comprehensive development programme on sporting events and commercial areas, through the power of internet, and sparing no effort on global promotion in order to raise the impact of aquatic sports”.